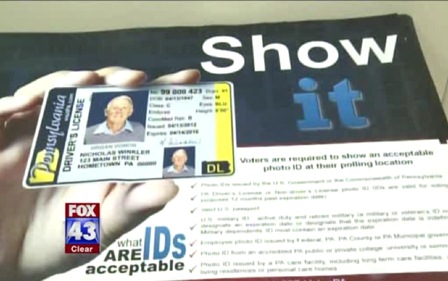 The ruling by Commonwealth Court Judge Robert Simpson is expected to be appealed.

Supporters argue that the law signed in March by Republican Gov. Tom Corbett will prevent voter fraud and is upheld by the Constitution.

Opponents contend that the new law will disenfranchise voters, and any implementation should be postponed until after the November 6 presidential election.

The state Supreme Court had given Simpson until Tuesday -- five weeks before the election -- to rule on the matter.

In his ruling, Simpson granted a preliminary injunction that temporarily halts enforcement of the law until after the election.

He cited likely disqualification of eligible voters as the reason.

"Consequently, I am not still convinced in my predictive judgment that there will be no voter disenfranchisement arising out of the Commonwealth's implementation of a voter identification requirement for purposes of the upcoming election," Simpson wrote. "Under these circumstances, I am obliged to enter a preliminary injunction."

The ruling means the voter ID law could be enforced starting next year. Simpson said he will schedule a further hearing on whether to issue a permanent injunction.

Prior to the new law, first-time voters in Pennsylvania were allowed to present documents like bank statements and utility bills in lieu of photo identification. Under the new law, all voters would have to present a valid photo ID -- one that is sanctioned by the state -- before they cast their ballots.

To get a photo ID, residents must have a valid Social Security card; an official birth certificate or U.S. citizenship documents; and two proofs of residency, such as a utility bill or tax records.

Critics say the new law is an attempt by Republicans -- who overwhelmingly support the measure -- to gain the advantage in a close election.

Corbett said the law "sets a simple and clear standard to protect the integrity of our elections."

However, lawyers on both sides admit there are no known cases of in-person voter fraud.

Civil rights organizations and attorneys filed a lawsuit in May to overturn the new law. The case made its way to the state Supreme Court, which sent the dispute back to Simpson in the Commonwealth Court.