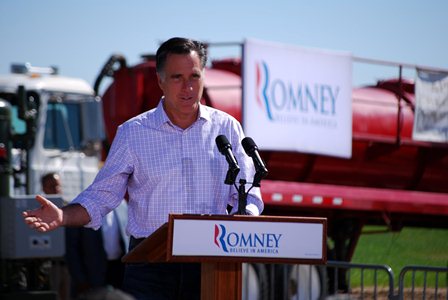 (CNN) -- A Utah woman unwittingly started a grassroots campaign when an e-mail she sent to her five children and a handful of friends urging a day of prayer and fasting for Mitt Romney started making the Mormon rounds.

Mona Williams, a Price, Utah, member of The Church of Jesus Christ of Latter-day Saints, wrote Sunday evening, Sept. 23, 2012, to tell people closest to her how frustrated she is with the state of the country.

"A lot of my frustration is because I feel I don't know what to do to really make a change. Well, this time I do," she wrote. "I am asking you to join me and my family on Sunday Sept. 30 by fasting and praying for Mitt Romney. That he will be blessed in the debates," the first of which is next Wednesday.

"I know that seems like such a small thing, but I believe 'from small things, great things can come about,'" she continued. "I know that fasting and praying brings about miracles."

The message that was intended for a group of about 10 people has since cropped up in Mormon inboxes around the country, including in Colorado, California and Nevada, BuzzFeed reported.

The attention that has followed has left Williams both floored and uncomfortable. When she was contacted by CNN affiliate KTVX on Wednesday, she said, "You could have pushed me over with a feather."

"Can we just pretend this didn't happen," she asked with a laugh when CNN reached her Thursday night. She spoke to fears about those who dismiss people of faith, or take what she and others consider sacred and make it ugly.

"I'm simply a woman with faith," she told CNN. "I am just a woman who believes that God loves this country and his hand is in whatever happens."

It's common for faithful Mormons to fast for a day each month while offering prayers for a particular purpose.

And for Williams, who works as an aide to special needs kids, it's prayers -- not money -- that she has to give to her candidate of choice.

But she also sees that she has struck a chord with those who are like her.

"We're very silent. We're not very in your face. I'm not going to go stand up and march ... And I'm not going to chew on someone's backside," Williams said. "But I can use my faith. It's a very personal, passionate thing."

The e-mail was not sanctioned or cleared by Mormon church officials. In fact, the church "is strictly politically neutral and does not endorse political candidates," LDS Church spokesman Michael Purdy told CNN in a written statement.

The Student Review, a student-run paper at LDS Church-owned Brigham Young University posted Williams' message -- or at least a version of her message that was forwarded - online, and the responses reveal a community rich with a variety of perspectives.

"I cannot tell you how scared I am for the future of our country," wrote an unnamed student who is heading toward graduation. "What I do know is that Mitt Romney is a worthy priesthood-holding leader who has the potential to do a lot of good for our country. I know the Lord takes worthy men and makes them qualified for miraculous experiences."

While another student answered that Romney's name should be added to the "Temple Prayer List," others fired back, calling such rhetoric "completely ridiculous" and "embarrassing."

"You assume that if we fast then God will bless Mitt Romney to win," wrote Ryan. "Who are you to say that it's God's will that Mitt Romney wins? I've been an active member my entire life and I can't support Mitt Romney with a good conscience. Just because he is a member of our church does not mean all of his policies are correct or even moral."

Added Jay: "The Lord DOES care about who leads our country, He just doesn't care what party they are from. Only we look at party, whereas the Lord looks on the heart."

It's precisely with her heart that Williams will fast and pray this Sunday, because that, she said, is what she can do.

"Whatever happens in this country," she says, "at least I've done my part."