Obama Outlines Plan for the Next Four Years 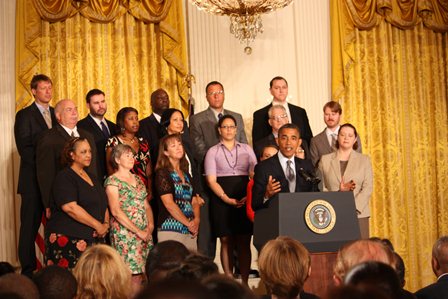 (CNN) -- The Obama campaign is releasing a new television ad on Thursday, just days before the first presidential debate, featuring President Barack Obama as he lays out his political agenda for the public.

The Obama campaign said it will run the two-minute spot titled "Table" in the battleground states of New Hampshire, Virginia, Florida, Ohio, Iowa, Nevada, and Colorado, and comes out on the heels of new ads put out by Republican presidential nominee Mitt Romney outlining the game plan for his presidency.

This cut-and-dry commercial does not play off of voters' emotions, spin Romney's words or highlight real Americans working to stay afloat in a struggling economy. Instead it's a simple head on shot of the president making his case to voters.

Here Obama tries to appeal to the public on a personal level. Instead of posing at his desk in the oval office, he sits in a setting resembling a family room.

"If I could sit down with you in your living room or around the kitchen table, here's what I'd say," he says as he introduces his plan for the next four years.

The president recognizes that he took the office in less than ideal times but does not create the illusion that the economy has fully rebounded.

"Today I believe that as a nation we are moving forward again," Obama says. "But we have much more to do to get folks back to work and make the middle class secure again."

The incumbent mentions Romney's plan to cut taxes for the wealthy and minimize regulations on Wall Street, referring to them as "the same trickle-down policies that led to the crisis in the first place."

When describing his own plan however, he fails to enter the realm of specifics.

"First, we create a million new manufacturing jobs and help businesses double their exports," he offers. "Give tax breaks to companies that invest in America, not that ship jobs overseas."

The president doesn't specify which industries will create these jobs. He also declines to mention how his administration will double exports when the eurozone's unstable economy suggests an inconsistent demand for American imports.

The president goes on to list his energy initiative.

"Second, we cut our oil imports in half and produce more American-made energy, oil, clean-coal, natural gas, and new resources like wind, solar and bio-fuels--all while doubling the fuel efficiencies of cars and trucks."

Domestic oil production has surged under the Obama administration. In late August President Obama finalized new fuel economy rules that will almost double today's standard for cars and light trucks by 2024. Both he and Romney have promised voters energy independence by 2020 however.

Obama continues by appealing to teachers and students.

He discusses adding 100,000 additional math and science teachers to the work force while training 2 million Americans with necessary vocational skills at community colleges.

"We insure that we maintain the best workforce in the world by ... cutting the growth of tuition in half and expanding student aid so more Americans can afford it," he says.

This statement comes at a critical time. The Pew Research Center released a report on Wednesday stating a record number of American households are burdened with student loan debt. In 2010 roughly 19% of households had student loans, up from 15% of households in 2007. This is an important topic for Obama as college students and the youth vote made up a significant portion of his voting base last election. He won two-thirds of voters between the ages of 18 and 29 in 2008.

Obama saves the subject of balancing the deficit for the grand finale.

"A balanced plan to reduce our deficit by four trillion dollars over the next decade on top of the trillion in spending we've already cut, I'd ask the wealthy to pay a little more," he says. "As we end the war in Afghanistan let's apply half the savings to pay down our debt and use the rest for some nation building right here at home."

Obama wraps up the ad equating his plan to "economic patriotism," suggesting that it is "rooted in the belief that growing our economy begins with a strong thriving middle class."

Instead of taking a negative line, he asks voters to compare his plan to Romney's and "decide for yourself."

Andrea Saul, a spokeswoman for Romney, said Obama had broken his 2008 campaign promise on cutting the national debt.

"Four years ago, Barack Obama called it 'unpatriotic' to run up debts our children will have to pay," Saul wrote in a statement responding to the Obama ad. "Yet in the time it takes his latest ad to run, our national debt grows by at least another $5 million. With $16 trillion in debt, 23 million Americans struggling for work, and spending out of control, President Obama's record is clear: we can't afford another four years that look like the last four years."