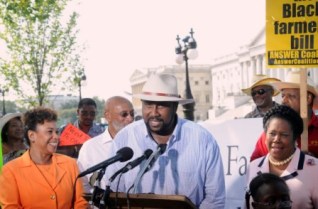 Both commercials blast the congressman over the House Republicans' recent decision not to vote on the so-called farm bill until after the elections.

"My grandfather, he homesteaded on this quarter," Les Franklund, a resident of the state, says in one of the ads. "It's our way of life out here. In Washington, it must be easy to lose sight of what's happening here in North Dakota."

House Speaker John Boehner indicated last week that GOP leaders do not believe they currently have the votes to pass either a short-term extension or a more comprehensive five-year measure.

The current five-year law establishing various levels of federal support for farmers and ranchers - now struggling with drought in many parts of the country - expires September 30.

A failure to pass a new law won't impact existing federal support in 2012, though it would have a significant impact on agricultural markets in 2013.

"(Berg's) not thinking about my farm, or my family," the man says in the ad.

Republicans argue the bill costs too much and includes far more money for food stamps than necessary. Berg, however, has said he's "frustrated with the Republican leadership" on the issue.

"We have to get a five-year, long-term bill passed. I'm really disappointed," Berg told CNN last week. "Agriculture is one of our bright shining spots in America right now, and we don't need to put this cloud of uncertainty over it."

The congressman argued that GOP leaders should have allowed a full House vote on the Agriculture Committee measure.

Asked about the farm bill's legislative prospects in the post-election lame duck session of Congress, Berg said, "I look back over history and this is more normal than not. ... I'm just doing everything I can do."

The new commercials mark the sixth and seventh ads the DSCC has aired in North Dakota since April. They're part of a $3 million ad buy, according to a source that tracks ad buys.

While Republicans consider the seat a potential pick up for the GOP this year, Democrats are aggressively fighting to keep the seat in their hands as the defend their majority in the chamber.

"We don't vote the party line. We vote for who we feel will do the best for us. Heidi Heitkamp has a record we can be proud of," Judi Hintz, a North Dakota resident, says in the other ad.

Political handicappers Stuart Rothenberg and Charlie Cook both rank the race as a toss-up.