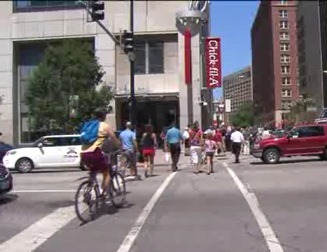 (CNN) -- A Chicago alderman says Chick-fil-A's president is publicly contradicting what company executives personally assured him for months -- that the fast-food chain is changing its stance on gay marriage -- and he asked the company Sunday to clarify.

Alderman Joe Moreno made news last week when he announced Chick-fil-A has ceased making donations to anti-gay groups and has enacted workplace protections for its employees against discrimination.

Moreno said the two concessions were the result of 10 months of negotiations he had with Chick-fil-A executives as he weighed whether to support a new Chick-fil-A restaurant in his Chicago ward. He said the executives gave him documents backing up the new positions.

Chick-fil-A, in a statement Thursday, affirmed the workplace protections. Friday, however, company President Dan Cathy denied the company has ceased making donations to groups that oppose gay marriage and said Chick-fil-A "made no such concessions."

"There continues to be erroneous implications in the media that Chick-fil-A changed our practices and priorities in order to obtain permission for a new restaurant in Chicago," Cathy said in a statement to Mike Huckabee, the former Republican presidential candidate who now runs a conservative website. "That is incorrect."

Moreno said Sunday that Cathy's statement "at the least, muddied the progress we had made with Chick-fil-A and, at the worst, contradicted the documents and promises Chick-fil-A made to me and the community earlier this month."

Moreno said Chick-fil-A executives gave him a letter earlier this year saying the company's non-profit arm, the WinShape Foundation, will not support organizations with political agendas. "We were told that these organizations included groups that politically work against the rights of gay and lesbian people," Moreno said.

He said the executives confirmed to him that both the foundation and the company in 2012 has not given money and will not give money to those groups.

"I am simply asking Mr. Cathy to confirm statements and documents that HIS company executives provided to me," Moreno said in a written statement, capitalizing "his" for emphasis.

"It's pretty simple, Mr. Cathy. Do you acknowledge and support the policies that your executives outlined to me in writing or do you not? Yes or no?" the statement added.

Chick-fil-A, whose restaurants are closed on Sundays, did not immediately respond to a request for comment.

While the company has never hidden its conservative principles, Cathy caused an uproar in July when, in an interview with the Baptist Press, he said the company supports "the biblical definition of the family unit."

The interview brought attention to donations the company made to organizations some activists said were anti-gay.

Gay rights activists and others denounced the company and promised a boycott, while others vowed to support the company. Huckabee suggested a "Chick-fil-A Appreciation Day" and thousands turned out to show their support.

Moreno said Sunday he has yet to introduce legislation for the new Chick-fil-A restaurant in his ward and will wait for Cathy's response before moving forward.