A Kitchen Is the Heart of a School 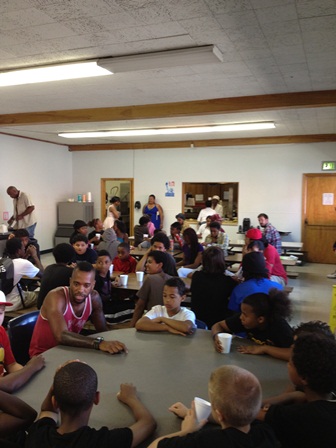 BAKERSFIELD, Calif. -- Standing in front of a classroom with invited media guests, Diane Newbold asks her third-grade class: "Do you know what this is?" She is holding up a pineapple.

Newbold is speaking to a room full of eager students and visiting media who gathered at Hort Elementary School September 13 to witness how Bakersfield City School District (BCSD) is at the epicenter of a revolution in healthy food now being served in school cafeterias across California.

Back in 2010, Congress passed The Healthy Hunger-Free Kids Act as a major step forward in the nation's effort to provide all children with healthy food in schools. The new mandate, effective July 1, 2012, has raised the nutritional standards for school meals across the nation to include more fruits, vegetables and whole grains, while setting limits on calorie and sodium intake.

BCSD however, has been taking strides to make school meals more healthy and accessible while increasing student exercise before the July 1 mandate was in place. Robinson says that "it's all about the education. You have got to set the groundwork to allow (the students) to know what they are getting and choose to try it."

At last week's briefing, sponsored by The California Endowment, which is working to promote healthful school meals in all of California's 9,800 public schools, fifth-grader and a panelist at the round table, Arlette Martinez, gave a ringing endorsement for the increased amounts of fruits and vegetables.

"At first I didn't like it, but after tasting it, I think fruits and vegetables are very good," says Martinez, who is currently running for student body vice president.

According to the BCSD -- California's largest elementary school district that currently has 28,870 students on its rolls, of which 76 percent are Hispanic, 11 percent are white, 9 percent are African-American and 4 percent are "all others" -- BCSD's Food Services Department provides 43,500 meals and snacks on a typical day, or 7.7 million in a year, with 89 percent of students qualifying for free or reduced price meals.

Hort Elementary School Principal Steve Robinson is proud of what his school has accomplished. He notes that providing healthy food in the cafeteria is not exactly inexpensive. But the grants they have received have allowed his school to promote healthy meals in the cafeteria, as well as increase exercise programs for students, making Hort a pioneer in the healthy schools movement. Last year, Hort received the Gold Award of Distinction for its innovations and achievements in school food services.

According to Brenda Robinson, BCSD had already included in its menu more fruits, vegetables and whole grains. With the new federal requirements, it increased vegetable servings from a half- cup to three-quarters of a cup. Additionally, there are new limits on calories, meat and meat alternatives.

Michelle Dominges, who has been with the BCSD Food Services Department for over 20 years, is ideally suited for her nearly year-old job as the department's chef. She is a graduate of Cook for America, a program that gives school chefs the tools to fight against childhood obesity and other diet-related illness.

Parent Delia Barron notes that she switched to providing healthy food at home after her children talked enthusiastically about their school meals.

"Before, I would pull out the chips and soda. Now I make sure to have a fruit salad," Barron says.

She has seen the results of the change in the home diet. Her whole family has more energy and is sick less, she says. Last year, her daughter scored perfect attendance.

Later, in the lunchroom, students were served a nutritional meal of beef tacos with a side of beans and cheese. The salad and fruit bar were the centerpiece of the meal. Students were encouraged to put their leftovers in a compost bin.

With its pre and after lunch thousand mile laps, its curricula weaving in classes about the origin and nature of food, and its salad and fruit bars drawing more kids than the hamburgers or beef tacos – Hort Elementary clearly is ahead of the curve.