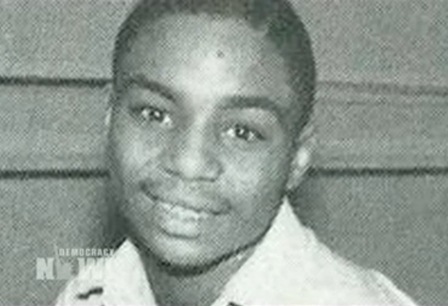 PHILADELPHIA, Pennsylvania (CNN) -- Less than two weeks before a convicted killer is scheduled to be put to death, his attorneys on Thursday made a last-ditch effort to save their client.

At a hearing in Philadelphia about whether authorities had withheld information that Terrance Williams had suffered sexual abuse at the hands of his victim, Judge M. Teresa Sarmina is expected to decide whether to grant a stay of execution for the death row inmate.

Williams, 46, is scheduled to be executed on October 3 for the 1984 slaying of Amos Norwood in which he beat Norwood to death with a tire iron.

Sarmina presided over Thursday's hearing, which ended Thursday without resolution but brought two crucial people to the witness stand.

Andrea Foulkes, who was the prosecutor in Williams' 1986 trial, told the court Thursday she suspected a relationship between the two men but did not have "a scintilla of evidence that Williams had a sexual relationship with Norwood."

"Norwood was never associated with Williams having sex or sexual relations," she testified Thursday.

Foulkes added that she never made any promises to Marc Draper, Williams' accomplice, regarding his testimony at the time. She said she thought Williams had targeted Norwood because Williams thought he was gay, and that Draper never informed her of any alleged abuse.

Draper, who is serving a life sentence for his involvement in the murder, testified that Williams had been in a relationship with Norwood

He said that when they arrived at the cemetery, where Norwood was ultimately killed, the two men left the car. Draper said he thought "they were going to do something intimate."

Detectives he later told "didn't want to hear it," he said. The detectives allegedly had him sign a statement about the killing under duress, which did not mention the relationship between the two men.

Draper added that prosecutors also didn't want to hear him explain "this was about a homosexual relationship."

He said earlier in a sworn statement that authorities at the time had pushed him not to disclose that Williams had been routinely sexually abused by Norwood, and that the abuse was Williams' primary motive to kill.

Defense attorneys argue that the jurors who convicted Williams more than 25 years ago were told that it was a robbery-homicide case and never learned of the alleged sexual abuse.

The sexual abuse allegedly began when Williams was 6 years old, according to his attorneys.

"Several jurors now say they would have voted for life in prison without the possibility of parole instead of death if they had known this important information," Williams' attorneys said in a statement last month after his execution date was set.

Philadelphia District Attorney Seth Williams has said the abuse allegations are hearsay and "a last-ditch effort to escape punishment."

"In the 28 years since the murder of Amos Norwood these new allegations only came to light just a few months ago, and (Williams) is not the one making the allegations. ... Not once has Williams actually testified under oath about all the abuse he allegedly suffered," the district attorney said in a statement Monday.

Williams and Draper led Norwood to an area near a cemetery, forced him to lie on the ground, tied him up, gagged him and stole his valuables, the governor's office said in a statement.

"Williams and Draper repeatedly beat the man with a tire iron and a socket wrench and then drove away in the victim's car. Williams later returned and burned Norwood's body," the statement said.

Since the execution date was set, there have been a number of high-profile supporters calling for clemency in the case, including Pennsylvania Attorney General Linda Kelly. More than 360,000 people have signed an online petition asking authorities to spare Williams' life. Norwood's widow has also asked for the execution to be called off.

The state's Board of Pardons on Monday failed to reach the unanimous agreement required to recommend clemency. Three members of the five-person panel voted in favor of asking Corbett to consider granting clemency. But two other board members voted against the petition.