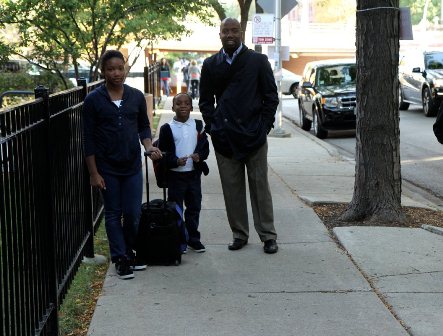 (CNN) -- Hundreds of thousands of Chicago students got up and put on their school clothes for the first time in more than a week, preparing to return to class Wednesday after teachers' union representatives voted to suspend their often acrimonious eight-day strike.

The deal, which still must be ratified by the union's overall membership, calls for average raises of 17.6% over four years and strips out a merit pay program that would have been tied to increased emphasis on student test scores.

That emphasis remains in the contract -- it's mandated by state law -- but scores will count for a lower percentage of teacher evaluations.

Teachers also managed to protect seniority pay increases and raises for additional education that the school system wanted to limit or eliminate, said Robert Bruno, a professor of labor and employment relations at the University of Illinois at Urbana-Champaign.

"Across the board, on every issue, the teachers got a more favorable outcome than the school system," Bruno said Wednesday.

But the school district and Mayor Rahm Emanuel also won concessions. The school day and year will be extended, and teachers backed off on their insistence that laid-off teachers be given even more consideration for jobs. Teachers also had initially asked for a 30% raise.

"The mayor doesn't walk away empty-handed from this," Bruno said. "He's not a loser ultimately in this."

"Well, I mean, it's the deal we have," Lewis said Tuesday on CNN's "Erin Burnett OutFront." "It's the deal we have. It's an austerity contract. The key is that we beat back the ugliest part of the so-called reform agenda, and that's important for us and our members."

Chicago Public Schools and the union struck a tentative bargain Friday afternoon. But on Sunday, union members decided to continue the walkout while they reviewed the proposal.

About 800 union delegates representing the 29,000 teachers and support staff met for more than two hours before voting to suspend the strike Tuesday. Many parents seemed relieved.

"I'm just glad that everyone got what they wanted, but I just wanted the children to be first," Lisa Russell, a parent, told CNN affiliate WLS-TV. "And I believe they are first."

The union membership will vote on the deal in "the next couple of weeks," Lewis said.

Darren Tuggle, who has taught high school English for 13 years, said the strike wasn't about money but about classroom conditions. He said teachers were frustrated with the board, whose members are appointed and most of whom come from business backgrounds.

The contract calls for longer school days for elementary and high school-age students, 10 more "instructional days" each school year and a single calendar for the entire school system, as opposed to the two schedules now in place, depending on the school.

The current median base salary for teachers in Chicago Public Schools in 2011 was $67,974, according to the system's annual financial report.

The new deal will transform the school system to the benefit of teachers and students, said David Vitale, chairman of the school board.

Emanuel said that, under the contract, a child entering kindergarten after the deal goes into effect would receive 2½ more years of instruction by the time he or she graduates.

"In this contract we gave our children a seat at the table," he said at a news conference.

Chicago Public Schools CEO Jean-Claude Brizard said that the schools had improved measurably in the past year in test scores. The graduation rate was the highest and the dropout rate was the lowest in history.

"With this agreement now, we have the foundation for transformation," he said.