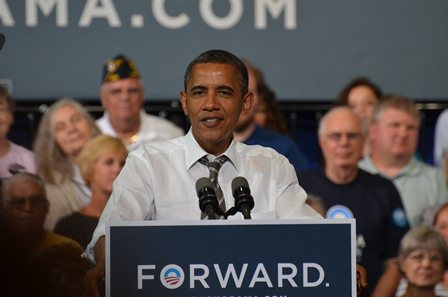 (CNN) -- President Barack Obama's campaign is continuing its push for people of faith to cast a November ballot in their favor. On Monday they unveiled a "People of Faith for Obama" a new initiative to mobilize voters that included Web video of the president and a faith platform.

In the video candidate Obama makes the case that his faith plays a major role in his decision-making process. He says when hearing stories of faith from Americans he is touched, "They reinforce the power of my Christian faith which has guided me through my presidency and in my life, as a husband, as a father, and as a president."

Religious liberty has become a hot-button political issue in this campaign cycle after the administration was criticized by religious leaders over a mandate on insurance companies covering the cost of contraceptives in certain situations, which some felt were a violation of their beliefs.

In the video the president also framed the auto bailout and the passage of health care legislation, two signature issues of his presidency, as playing into his faith narrative. "We're greater together than we are on our own. These shared moral obligations have guided me as president," he said.

"On issues like education, poverty, and immigration, I'm standing on the side of human dignity and the belief in the inherent worth of all human beings," he added.

The campaign is also releasing what it's calling a "faith platform."

"This document really puts together a full picture of the president's case to people of faith," a campaign staffer close to the effort said speaking on background because the information was not yet public.

The platform is broken down into three categories the staffer said: economic security for families, being our brothers and sisters' keeper, and faith in public life.

The platform will be hosted on the campaign website and sent out to campaign field offices.

This effort was long-planned, a campaign spokesmen speaking on background said and not in response to any particular hot-button issue like religious liberty. "We've been launching programs over the last year or so and they are on a rolling basis." The staffer noted they launched an effort targeting support among African-American voters in February among others.

The campaign staffer close to the initiative said they thought the program would have specific resonance with key groups the campaign has been targeting for support, Catholics and young evangelicals.

Catholics, their thinking goes, would be attracted to the appeal for working for the good of everyone.

The campaign initiative is being headed by Michael Wear, the Obama campaign's National Faith Vote Coordinator, Derrick Harkins, Director of Faith Outreach for the Democratic National Committee, the Rev. Regena Thomas, pastor of Allen A.M.E. Church in Atlantic City, New Jersey, Katherine Archuleta, a political director for the campaign, and Broderick Johnson, a campaign adviser who focuses on Catholic outreach.