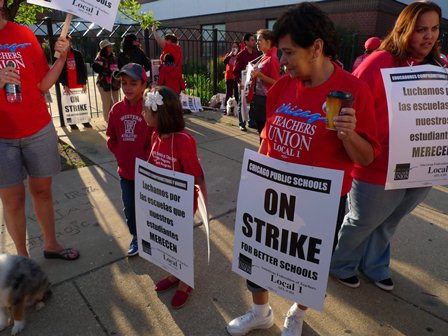 The move comes after Chicago Teachers Union representatives decided Sunday not to end a weeklong walkout, despite a tentative contract deal between union leaders and school officials.

The strike is illegal and endangers the health and safety of 350,000 children, the district said in a statement issued Monday.

"State law expressly prohibits the CTU from striking over non-economic issues, such as layoff and recall policies, teacher evaluations, class sizes and the length of the school day and year," the district said in its statement. "The CTU's repeated statements and recent advertising campaign have made clear that these are exactly the subjects over which the CTU is striking."

The strike also prevents "critical educational and social services, including meals for students who otherwise may not receive proper nutrition, a safe environment during school hours and critical services for students who have special needs," the district continued.

The request seeks only a judge's order to force teachers back to work, the district said. It does not ask the judge to rule on the labor dispute itself.

It was not immediately clear when a judge would hear the request.

The filing fulfills a vow by Mayor Rahm Emanuel on Sunday night to force teachers back to work. Emanuel called the union's decision to hold off on its vote "a delay of choice that is wrong for our children."

"I will not stand by while the children of Chicago are played as pawns in an internal dispute within a union," Emanuel said Sunday.

Teachers in Chicago, the nation's third-largest school system, are among the highest-paid in the country. The strike has drawn national attention as the teachers negotiate over the length of the school day, object to their evaluations being tied to performance and worry about job loss from school closings.

Parents of the more than 350,000 students in the school system have juggled schedules for a week, trying to make sure their children are looked after.

"Am I going to school again?" kindergartener Cyani asked her mom Toni and dad Allen Packer on Sunday.

"I just hope they come to a conclusion for the kids as well as the teachers," Allen Packer told CNN affiliate WBBM. "I'm a working citizen myself, so I have somewhat of a duty to be on the working man's side."

Gerre Harte has plunked down more than $100 in day care costs for her daughter Nell, in addition to modifying her work schedule.

Still, she wasn't ready to criticize the teachers for staying on the picket line.

The news still left Nell feeling a bit sad. "I like to go to school," she said.

With the strike continuing, the school system planned to open 147 "Children First" sites citywide Monday for students to go to, in addition to programs run by the city's park department and neighborhood organizations, Chicago Board of Education President David Vitale said.

But Vitale said that he, like the mayor, is "extremely disappointed" that such programs are necessary. He noted that classes began, for some students, on August 13 and that he didn't understand why they couldn't continue as work continues to finalize a contract deal.

"There is no reason why our kids cannot be in school while the union reviews the agreement," Vitale said.

Members of the teachers' bargaining team detailed the proposed contract to a group of 800 union representatives, called the House of Delegates, in a meeting Sunday afternoon. But Chicago Teachers Union President Karen Lewis said that, after extensive debate, the delegates said they wanted more time to discuss the contract with union members.

The House of Delegates will reconvene Tuesday afternoon after taking a day off for the Jewish New Year, Rosh Hashanah, at which point delegates could decide to end the strike.

If they do, classes could resume at the earliest on Wednesday. And even if the strike is ended, the rank and file of the more than 26,000-member union's would still have the opportunity to accept or reject the proposed contract.

As of Sunday, though, Lewis said that a "clear majority" of union delegates did not want to suspend the strike given the proposed contract.

"They are not happy with the agreement," Lewis said.

Classes were canceled all last week, when the union went on strike after failing to reach a contract agreement with school board officials.

The negotiations have taken place behind closed doors. Publicly, the past week has been marked by sometimes biting remarks, as well as vocal picketing in and around the city's schools, some of which opened for a few hours each weekday to give some students a place to go during the strike.

Both sides indicated Friday that they'd reached a tentative agreement, though teachers union leaders stressed then that any decision to end the strike or not would be determined this weekend.

Lewis said that one problem is that "there's no trust" of school board members. Delegates found several elements of the contract problematic, with the union president calling job security chief among them.

"The big elephant in the room is the closing of 200 schools," Lewis said. "(Union members) are concerned about this city's decision on some level to close schools."

It was not immediately clear where Lewis got the 200 figure or when she believes such school closures might happen.

But Marielle Sainvilus, a spokeswoman for the Chicago Public Schools, called Lewis' claim "false," asserting that union leaders said a few days ago that 100 schools would close, and "I'm sure it'll be another number tomorrow."

"All Ms. Lewis is trying to do is distract away from the fact that she and her leadership are using our kids as pawns in this process," Sainvilus wrote in an e-mail.

Another point of contention involves the teacher evaluation system, Lewis said. The tentative contract would change it for first time since 1967, taking into account "student growth (for the) first time," according to the school system. And those teachers who are rated as "unsatisfactory and developing" could potentially be laid off.

Principals would keep "full authority" to hire teachers, and the school system will now have hiring standards for those with credentials beyond a teacher certification. In addition, "highly rated teachers" who lost their jobs when their schools were closed can "follow their students to the consolidated school," according to a summary of the proposed contract from Chicago Public Schools.

This contract calls for longer school days for elementary and high school-age students, 10 more "instructional days" each school year and a single calendar for the entire school system, as opposed to the two schedules now in place, depending on the school.

The pay structure would change with a 3% pay hike for the first year of the contract, 2% for the second year and 2% for the third year. If a trigger extends the contract to four years, teachers will get a 3% pay increase. Union members would no longer be compensated for unused personal days, health insurance contribution rates would be frozen, and the "enhanced pension program" would be eliminated.

As is, the median base salary for teachers in the Chicago public schools in 2011 was $67,974, according to the system's annual financial report.