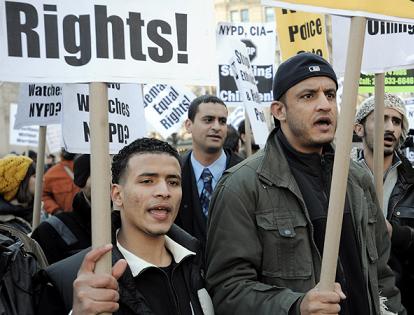 At a time when U.S. Muslims and mosques are increasingly under attack, some Muslim Americans say Obama has not taken a strong enough stance against Islamophobia.

The Democrats' inclusion last week of support for marriage equality and Jerusalem as the capital of Israel in their official party platform may have further disillusioned some Muslim voters, who were already critical of Obama's failure to properly address the discrimination their community has faced.

"If the convention recognizes same-sex marriage, I wouldn't give them [Obama-Biden] my vote. It could be that I won't vote at all," said Mohamud Yussuf, editor-in chief of the Somali magazine Runta in Seattle.

Four years ago, Obama enjoyed overwhelming support from Muslim voters – 89 percent of the population voted for him. There is currently no polling data indicating the percentage that intends to vote for Obama this November, but politically active community members agree that enthusiasm for his candidacy has waned.

In particular, many say they are disappointed by the way Obama has shied away from addressing an apparent rise in Islamophobia spreading throughout the United States.

In the last two weeks of Ramadan alone, there were nine incidents of attacks on mosques across the country; and during the 2011-2012 legislative cycle, a total of 78 anti-Islam state laws were introduced, according to the Council on American Islamic Relations.

Meanwhile, Obama, in an effort to respond to false claims by some conservative activists that he practiced Islam, has repeated on several occasions that he is not Muslim.

"Instead of saying there is nothing wrong with being Muslim, he just likes to distance himself, making it like being a Muslim is a crime," said Yussuf.

Zahra Billoo, a Muslim civil rights attorney in the Bay Area, agreed that Obama has not been vocal enough as a "result of a fear of being called a secret Muslim."

"He has visited mosques in other parts of the world, but not a single one in the United States," said Billoo. "The Daily Beast had a story a few weeks ago about the half dozen Islamic institutions that have been attacked recently. Imagine that had happened to churches and synagogues and then imagine the president would not speak about it, or visit one of these sites."

In fact, Obama hasn't been silent on the issue of Islamophobia; Muslim Americans note that he has spoken out on several occasions against anti-Muslim attacks. But they say his defense of Muslims has been more limited in scope than what the community would like to see.

For example, Obama defended Huma Abedin, aide to Secretary of State Hillary Clinton, praising her as "an American patriot" in response to charges by Republican Representative Michele Bachmann that she was secretly tied to Muslim extremists. But Zahir Janmohamed, a Muslim former Congressional staffer, noted that Obama's defense was singularly about Abedin.

"What about the run-of-the-mill 20-year-old Muslim kid who has just come to D.C. who wants to work for Congress? That's the kid we have to defend," said Janmohamed. "No one stands up for them. It's a very chilling environment. I blame Obama in many ways for his complete unwillingness to stand and up and recognize his role."

Some Muslim Americans also believe that their needs are being ignored, while Obama makes an effort to meet the demands of other minority voters.

"He has made concessions to various special interests or minority groups in the last year to win over their vote – suspending the deportation of Dream students, repealing Don't Ask, Don't Tell – but I haven't seen a concession like that to the Muslim community," Billoo noted.

And while there was a record number of Muslim American delegates at the DNC last week, Muslim voters noticed that there was not a single Muslim speaker at the convention.

"We've got two Muslim members of Congress – neither of them is speaking," said Janmohamed. "These conventions are always the chance to spotlight someone who deserves a national profile. Surely one of these Muslim candidates is a good person to put up there."

Suhail Khan, a Muslim conservative activist, said Obama "hasn't kept a single promise" to the community, from reforming the Patriot Act, to closing Guantanamo, or making progress on Israel-Palestine.

Although Obama touted his successes in foreign policy during his speech at the DNC, some Muslim American voters have taken a more critical stance.

"By and large on foreign policy I rarely meet American Muslims who are happy," said Janmohamed.

One of the United States' most controversial programs is its use of drones, or pilotless aircrafts, to carry out targeted killings of suspected terrorists, mainly in the Middle East and South Asia, as a primary counterterrorism measure. The Obama administration has been criticized for its lack of transparency surrounding these drone attacks and the lack of due process afforded to its targets.

"He [Obama] put into place the ability to not only kill suspected terrorists, but to kill Americans without trial," said Khan, referring to the Obama administration's drastic expansion of the drone program, and the killing of Anwar al-Awlaki, an al Qaeda operative, and his son Abdulrahman al-Awlaki, U.S. citizens living in Yemen, through drone strikes in 2011.

Despite these criticisms, some Muslim voters remain strong supporters of Obama, believing that factors outside of the president's control impacted many of his policy decisions over the last four years.

"Do people forget that there are three branches of government that have key parts in determining what our country does or doesn't do?" asked Jihad Saleh, a board member of the National Muslim Democratic Council. "Guantanamo has been largely cleared out. Would we like to have it shut down? Yes. But there has been progress made."

Others say the election in November is about more than one single issue like drones or Islamophobia.

But even those who support Obama say their decision to back the Democrat has more to do with a fear of what a Romney-Ryan presidency could mean for Muslim Americans.

"What we saw at the RNC, the party has shifted so far to the right," said Janmohamed. "The Republican Party really was making an argument about America that excludes not only just Muslims, but African Americans, Jews, gays, so many people. That's quite frightening."

Political observers say the community's disappointment with both parties could lead some Muslim voters to stay home on Election Day.

"I think there's no doubt that you're going to see fewer Muslim Americans coming to the polls, not giving contributions as they were in 2008," said Khan. "It remains to be seen how many will go to the GOP. Some may go to third party candidates."

One of these voters is Billoo, who says she plans to vote for the Green Party in November because she is dissatisfied with both Republicans and Democrats.

Some worry that Muslim Americans' potential absence at the polls this November could impact the outcome of the elections.

While Muslims represent a very small fraction of the total country's population (0.62 percent according to 2011 data from the Pew Research Center), many are concentrated in swing states such as Virginia, Florida, Ohio, Michigan, and Pennsylvania.

"They don't know what to do; they're just not going to vote," said Haidar Ali Anwar, president of Muslim Students Association West, who believes there will be a smaller voter turnout in the Muslim community this presidential cycle. The way they see it, Ali Anwar said, "They're either going against their values or their people, so they're just going to stay inactive."