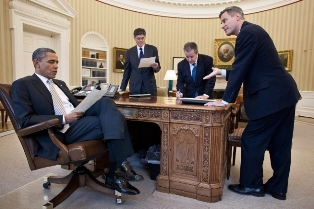 At a rally in a northern Virginia suburb of Washington, Romney offered his condolences for families of American diplomatic workers who died at the American consulate in Benghazi -- including Chris Stevens, the American ambassador to Libya -- but quickly turned to a barbed critique of how Obama has positioned the United States in the world.

"As we watch the world today, sometimes it seems that we're at the mercy of events instead of shaping events, and a strong America is essential to shape events," Romney said.

The Republican candidate's remarks came a day after Romney, in Florida, renewed an attack on Obama that began late Tuesday, when his campaign issued a statement calling the Obama administration's response to an assault on the U.S. embassy in Cairo "disgraceful." That statement came before news broke that America's ambassador to Libya had died in an attack on a consulate in Benghazi.

On Wednesday, Romney continued that approach, saying Obama had "demonstrated a lack of clarity as to a foreign policy."

"I think it is a terrible course for America to stand in apology for our values," Romney also said. "That instead when our grounds are being attacked and being breached that the first response of the United States must be outrage at the breach of the sovereignty of our nation. And apology for America's values is never the right course."

In his remarks, Romney again accused the Obama administration of sympathizing with the instigators of the violence in Cairo, citing a statement released by the American embassy there stating it "condemns the continuing efforts by misguided individuals to hurt the religious feelings of Muslims."

A timeline of events Tuesday suggests Romney was mistaken in that allegation, since the violence came after the first statement was published. A later tweet from the embassy, which was subsequently deleted, indicated the embassy was standing by their original statement and also condemning the protests.

Reaction to Romney's sharply negative tack has been mixed. Obama, along with other Democrats, pushed back, saying Romney was injecting politics during a time of still-developing international crisis. Like Romney, Obama did not mince words about his political opponent.

"Gov. Romney seems to have a tendency to shoot first and aim later, and as president, one of the things I've learned is you can't do that," Obama said during an interview with CBS. "It's important for you to make sure that the statements that you make are backed up by the facts and that you've thought through the ramifications before you make them."

Former Ambassador Nick Burns, who served in the administrations of former Presidents Bill Clinton and George W. Bush, said he was "dismayed" by Romney's choice to inject politics into what he said was a "very difficult situation" for the United States.

"I think it's time for Americans to stand together and I hope Gov. Romney would stand with the administration," Burns said, also on CNN.

Republicans have largely refrained from criticizing their party's nominee, at least publically. Sen. John McCain of Arizona, the 2008 GOP presidential nominee and the ranking Republican member of the Senate Armed Services Committee, wouldn't support or chastise Romney's stance on CNN Thursday morning, saying only that he agreed Obama's policy toward the Middle East was weak.

"Now the tick tock back and forth is something, frankly, I didn't pay attention to," McCain said on "Starting Point."

"I do know this. Americans are outraged when our embassy is attacked and the Egyptian government does not take the proper measures to protect it," McCain continued. "How much that affects our relationship with Egypt, I think, is something we have to carefully calibrate, recognizing how important a role Egypt is in the entire Middle East."

Other conservative voices, including the editorial page of the Wall Street Journal, also attempted to shield Romney from critics.

"As Tuesday's events showed, pandering to Islamists who would use the video to inflame anti-American sentiment isn't going to stop the protests," read the editorial, which was published under the headline "Romney Offends the Pundits."

"His political faux pax (sic) was to offend a pundit class that wants to cede the foreign policy debate to Mr. Obama without thinking seriously about the trouble for America that is building in the world," it continued.

This week's deviation to foreign policy comes after more than a year of a near-singular campaign focus on jobs and the economy. The topic re-entered the political discussion following the Republican National Convention at the end of August, when Democrats piled on Romney for not mentioning Afghanistan in his speech accepting the GOP presidential nomination.

Later, during their own convention, Democrats highlighted support for American troops currently in war zones and the president's successful foreign policy actions, including the mission that killed Osama bin Laden. This particular thread was viewed by many as successfully positioning Obama ahead of Romney on an issue that Democrats have traditionally not seen as a strength.

Voters consistently say in polls Obama would better handle America's relationships with other countries if re-elected. In the latest CNN/ORC International survey released earlier this week, Obama had a 54%-42% advantage over Romney on foreign policy.