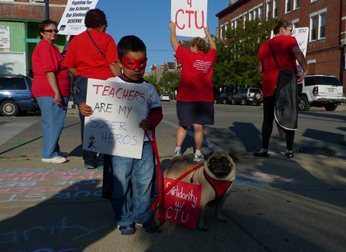 CHICAGO (CNN) -- Chicago's teachers strike hits day four Thursday with no deal between the teacher's union and the school board, and Rev. Jesse Jackson offering to find a way to bridge the chasm between the two.

But after Wednesday, a day that both sides did not meet until late in the evening, some were not optimistic.

"We feel like we're in a pretty good place," Chicago Teachers Union President Karen Lewis told reporters. "Both sides are making movements. We still have a lot of work to do but we are a lot closer together."

Chicago School Board President David Vitale said: "Very productive evening, really good discussions and proposals on the most difficult issues that we face."

Despite the optimism, Chicago public schools will still be shuttered on Thursday leaving 350,000 students with little options.

"Everyone has their own point of view, but it's the kids who are hurting," said Omar Alday, who has two public school children. "They should be in school learning."

The union, which represents nearly 30,000 teachers and support staff, called the strike on Sunday night.

Some of the sticking points have centered around teacher evaluations and provisions dealing with jobs for laid-off teachers.

The union has said the two sides had been close to a deal on pay, but far apart on evaluations, benefits and other issues.

The median base salary for Chicago public schools teachers in 2011 was $67,974, according to the system's annual financial report.

The two sides were scheduled to talk again starting at 9:30 a.m. CT Thursday.