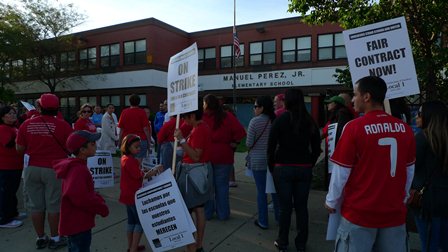 (CNN) -- Chicago public school teachers began manning picket lines instead of classrooms Monday, launching the first teacher strike in the city in 25 years over pay, benefits and other issues.

The strike, announced Sunday night, left about 350,000 students without a school to attend and parents scrambling to find alternatives.

The school district has opened 144 of its 578 schools for part of the day to provide a safe environment and meals to children in need. Also, dozens of churches and civic organizations have stepped into the vacuum to provide activities for the thousands of suddenly idle students. And police, expecting an uptick in trouble from kids on the streets, pulled officers from desk duty to increase patrols.

The union that represents nearly 30,000 teachers and support staff in the nation's third-largest school district called the strike after negotiators failed to reach a contract agreement with school administrators despite 10 months of negotiations.

Teachers say the biggest issues leading to the impasse are maintaining their health benefits and job security, as well as improving classroom conditions.

As many as 6,000 teachers could lose their jobs under a new evaluation system based on standardized test scores implemented by the school district, Chicago Teachers Union President Karen Lewis said.

"This is unacceptable," she said Sunday. "This is no way to measure the effectiveness of an educator. Further, there are too many factors beyond our control which impact how well some students perform on standardized tests such as poverty, exposure to violence, homelessness, hunger and other social issues beyond our control."

Another critical issue is teachers' pay.

The union said the two sides are close on compensation after school officials had offered a deal that would increase salaries 16% over four years. The average teacher salary in Chicago was $74,839 for the 2011-2012 school year, according to the district.

"Negotiations have been intense but productive, but we have failed to reach an agreement that would prevent a labor strike," Lewis told reporters late Sunday night.

The Chicago school district, like others across the nation, is strapped for cash and cannot afford to take on the higher costs associated with the deal, according to Chicago school board president David Vitale.

"We have no more flexibility when it comes to finance," Vitale told CNN on Monday, just hours into the strike.

Vitale and other state and local authorities have called the strike "avoidable."

"The kids in Chicago belong in the classroom," Chicago Mayor Rahm Emanuel said Sunday night. "Our kids do not deserve this."

"Both sides need to get back to the table as quickly as possible and really stay in there, negotiate through the night if necessary," he said Monday. "Get it over with quickly so that we can get these kids back in school."

The school year came to an abrupt halt not long after it began. Some students began class on August 13. Others started on September 4. Chicago's charter schools, which serve about 50,000 public school students, will operate normally during the strike, school officials said.

While it's keeping 144 of its schools open to provide a haven for part of the day, the school district urged parents "to first explore other options for their children."

"We know that a strike will put a strain on many families, and no one will be hurt more by a strike than our students," the district said on its website.

One of the organizations that is opening its doors for students during the strike is Young Chicago Authors, which has a free program for part of the day for students in grades six through 12.

"In collaboration with core performance artists and special guests, young people will see the power of their voices in action through film, performance and discussion," the group said.

Parents who cannot get their kids to these programs are concerned about what students might get into during the strike.