Video: 'You Didn't Build That:' a Theme Out of Context 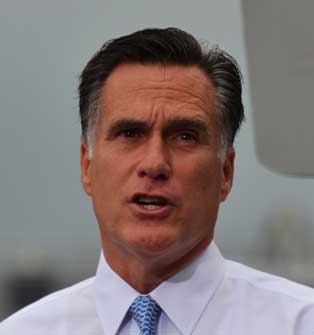 That July comment by President Barack Obama was the cornerstone of this year's Republican National Convention. Republicans have seized on the phrase -- a seemingly stray clause in a line Obama delivered at a campaign stop in Virginia -- as a kind of Freudian slip that reveals the president's hostility to free enterprise.

The phrase "We Built It" was the backdrop for speaker after speaker during Tuesday night's convention proceedings, and speakers have invoked it to paint Obama as an out-of-touch, big-government liberal.

"That makes me think that Barack Obama has a problem with the American dream," GOP Chairman Reince Priebus said Tuesday.

"He said, 'You didn't build it.' Translation: 'It doesn't rightly belong to you,' " former Arkansas governor and 2008 presidential hopeful Mike Huckabee chimed in Wednesday.

House Speaker John Boehner delivered what may have been the most epic recounting of the line, putting it in the context of his family's Cincinnati tavern: "Now, let's say a guy walked into our bar, and before he could say anything, he overheard a regular telling his story," Boehner said Tuesday night. "Turns out this guy ran a small business, got involved in it while he was in school. Then, out of nowhere, his business partner died. They had just one customer. So he fought like hell through sleepless nights and close calls ... Now, if a guy walked into a bar and heard that story, and he said, 'Well, if you've got a business, you didn't build that,' well, you know what we'd do with him, don't you? We'd throw him out."

Vice presidential nominee Paul Ryan invoked it in his acceptance speech Wednesday, praising small business owners who show up "to open the door at 5 in the morning."

"Nobody did their thinking, and worrying, and sweating for them," Ryan said. "After all that work, and in a bad economy, it sure doesn't help to hear from their president that government gets the credit. What they deserve to hear is the truth: Yes, you did build that."

The clips that ran between speakers at the GOP convention took things further, heavily editing Obama's remarks to set up television-ready vignettes with business owners who took umbrage at the comment.

Obama's remark came at a July 13 speech at a firehouse in Roanoke, Virginia, where he attacked Republican opposition to his economic plans and defended the role of government in promoting economic growth. It is true that he used the phrase, "you didn't build that."

Here is the full text:

"If you were successful, somebody along the line gave you some help. There was a great teacher somewhere in your life. Somebody helped to create this unbelievable American system that we have that allowed you to thrive. Somebody invested in roads and bridges.

"If you've got a business -- you didn't build that," he continued. "Somebody else made that happen. The Internet didn't get invented on its own. Government research created the Internet so that all the companies could make money off the internet. The point is, is that when we succeed, we succeed because of our individual initiative, but also because we do things together. There are some things, just like fighting fires, we don't do on our own."

So there it is. Everything before and after "You didn't build that" refers to infrastructure, education and public services.

Obama released a rebuttal to the criticism within two weeks of his Roanoke appearance. In a television spot, the president tells viewers, "Of course Americans build their own business. Everyday hardworking people sacrifice to meet a payroll, create jobs, and make our economy run. And what I said was that we need to stand behind them, as America always has. By investing in education, training, roads and bridges, research and technology." He called ads that used the edited version of his remarks "flat-out wrong."

It's a classic example of a remark being taken out of context.