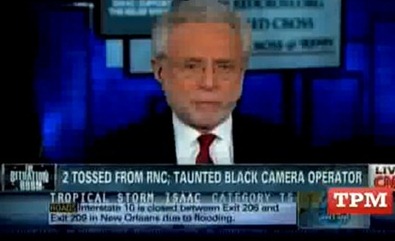 CNN has confirmed that a Black camerawoman who works for the network was the victim of a racial attack at the Republican National Convention on Monday.

Two audience members threw nuts at the woman and said, "This is how we feed the animals."

Both attendees were thrown out and officials from the convention called their actions "deplorable".

Although officials from the event and pundits from both parties have denounced the actions of the two attendees and characterized it as an isolated incident, a number of delegates and pundits have dismissed controversial racial rhetoric from people such as Mitt Romney throughout the convention.

On episodes of Real Time with Bill Maher and Morning Joe, Republican Jack Kingston and Republican National Committee Chairman Reince Priebus, respectively, both dismissed a joke Mitt Romney made about President Obama's birth certificate as having no racial undertones. Almost verbatim, they both stated that Romney was allowed to make the joke because Obama had made light of it at a past Correspondents Dinner.

Priebus also dismissed claims that the GOP uses coded racial language when discussing issues like welfare, even though research in books such as Michelle Alexander's "The New Jim Crow" has shown that politicians use race neutral rhetoric to push policies that have a specific detrimental impact on people of color.

Black Republican delegates have also dismissed attacks on the GOP for its racial rhetoric as "playing the race card".

However, Steele did acknowledge that Republicans do need to do more to court Black voters.

According to a NBC/Wall Street Journal poll, Romney is currently polling at zero percent support among African-Americans. In comparison, Obama has support from 96 percent of the Black voting bloc, according to the poll.