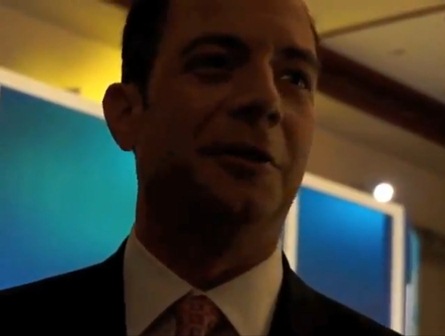 During a debate on "Morning Joe", Matthews lashed out at Priebus and the GOP over racially coded language. The host took offense to the casualness of birther jokes and how they paint President Obama as an "other", as well as questionable claims in Mitt Romney's ad about Obama's welfare policy.

Other members of the panel were noticeably uncomfortable during the fiery exchange. However, audience members applauded Matthews at different points during the discussion.

When Moreno caught up with Priebus, the RNC Chairman said Matthews took the prize for "biggest jerk in the room." He went on to call the MSNBC host an Obama surrogate, claiming the Obama campaign is about division and distraction.

When asked if he would go back on MSNBC, Priebus said he was open to it. He also left a parting shot for Matthews, saying, "If more than ten people watched his show I would actually care."