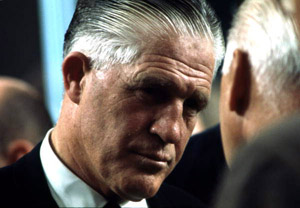 The storm caused a one-day delay in the convention agenda, but Republican officials appeared determined to stick to the tightened three-day schedule. Events kicked off Tuesday afternoon with official business and speeches accusing President Barack Obama of failed leadership and undermining the American dream.

In reference to Obama, Priebus said "he hasn't even run a garage sale or seen the inside of a lemonade stand." The nation needs a president "with real experience in a real economy," Priebus added. "Mitt Romney will be that president."

Other speakers swiftly followed the lead of Priebus. "America's in trouble," declared Rep. Jason Chaffetz of Utah, while congressional candidate Richard Hudson of North Carolina said, "You can't support Barack Obama if you want to stop the spending, stop the waste and stop the assault on our values."

Rep. Dan Benishek of Michigan complained that Democrats in Washington were "spending away our children's and grandchildren's futures," while Rep. Tim Scott of South Carolina serenaded the president with a chorus of the Ray Charles tune, "Hit the Road, Jack."

At a campaign event in Iowa, Obama said Tuesday that he expected the GOP convention to be "a pretty entertaining show."

"I am sure they will have some wonderful things to say about me," the president said. "But what you won't hear from them is a path forward that meets the challenges of our time." 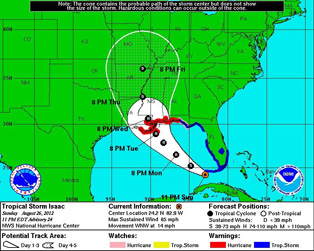 Among the planned convention events Tuesday were the roll calls of delegates that will show that Romney has locked up the necessary support for the party's nomination to challenge President Barack Obama in November.

However, organizers who previously described the roll call as the nominating process said Tuesday that the formal nominations of Romney and running mate Rep. Paul Ryan of Wisconsin won't occur until Thursday, the last day of the convention.

Still, Romney and his wife, Ann, flew into Tampa Tuesday morning and arrived at the downtown convention site two hours before the proceedings were scheduled to begin. Ann Romney is one of the featured speakers Tuesday night. Ryan and his family also arrived in Tampa early Tuesday afternoon.

Organizers acknowledged they were monitoring the storm projected to make landfall in Louisiana as early as Tuesday evening, just a day before the seventh anniversary of devastating Hurricane Katrina hitting the state.

Their concern is the perception of a celebratory convention atmosphere with colorful balloons and soaring rhetoric as a hurricane slams into the Gulf Coast, evoking memories of the havoc caused by Katrina and the ensuing criticism of the Republican administration's response.


However, Romney and Republicans are reluctant to lose any more of their best opportunity to define the candidate for the American people with less than three months until the election. The convention wraps up with Romney's primetime acceptance speech Thursday night.

"He is a very shy guy. He is a humble guy. He doesn't like to talk about himself. That's who he is," House Speaker John Boehner said of Romney in an interview Tuesday with CNN Senior Congressional Correspondent Dana Bash. "But I've known Mitt Romney for a long time. Decent, honest, hardworking guy. And I think Thursday he'll have a chance to reintroduce himself to the American people."

The speech will give Romney a major chance to speak for himself, rather than be defined by either his Republican primary rivals or by Obama, Boehner said.

"He's been locked in this Republican primary and then locked into this battle with the president," the Ohio Republican added. "And as a result, people have all different kind of views of him. So I think Thursday night is clearly an important speech for him and I think he'll have a chance to reintroduce himself to the American people, most of whom are just paying attention now."

The 2,200-plus delegates will vote Tuesday on a conservative party platform and hear speeches from Ann Romney and top Republican politicians, including the keynote address by New Jersey Gov. Chris Christie.

In a sign of lingering internal division in the party after a rugged primary campaign won by Romney, rival candidate Rep. Ron Paul of Texas was thronged by supporters when he came on the convention floor before Tuesday's session convened. Some Paul

supporters shouted "let him speak," referring to their candidate's exclusion from the convention agenda.

For Romney, 65, the nomination will put him one step away from the goal he first sought in 2007 by running for president after serving as a Republican governor for four years in traditionally Democratic Massachusetts.

The multimillionaire businessman lost to veteran Sen. John McCain in the Republican primary campaign in 2008, then spent the following two years preparing for another try. He emerged victorious from a rugged primary race in which rivals challenged his conservative credentials, and continues to walk a political tightrope that attempts to galvanize right-wing support while also appealing to moderates and independent voters.

So far, the biggest casualty of the shortened schedule has been a planned appearance by Donald Trump. The real estate mogul and outspoken conservative was going to take part Monday.

Louisiana Gov. Bobby Jindal, considered a rising conservative star in the Republican Party, also will not attend because of the storm bearing down on his state. Members of the Louisiana delegation in Tampa sounded torn over being away from loved ones under possible threat.

"I think that for Louisiana people, we know that the political part of it is important, what we're here for, but it is hard to celebrate in some ways when you have your heart in a different place," delegate Adonica Duggen said.

A more reclusive Republican backer, Nevada billionaire Sheldon Adelson, is expected to attend the convention, a source with knowledge of the plan told CNN. Adelson and his wife, Miriam, have given at least $36 million to various organizations and candidates this campaign season, according to the Center for Responsive Politics, which tracks the influence of money in politics.

The casino magnate, who is one of the nation's richest men, has told friends he is willing to spend up to $100 million this election season to make sure a Republican is elected to the White House and to support GOP congressional candidates.

Such unlimited backing from private and corporate donors has helped Romney and Republicans gain a big fund-raising advantage over Obama and Democrats.

In a new ad Monday, the liberal MoveOn.org's political wing attacked Romney for what the group says is his focus on the rich. The 30-second spot, titled "Stepping on the Middle Class," features Romney and Ryan lookalikes stepping on people dressed as typical middle-class Americans -- firefighters, students, seniors and children -- as they walk across the convention floor to accept the GOP nomination.

The latest CNN/ORC International poll indicates a dead heat between Romney and Obama, with new numbers released Sunday showing that 53% of likely voters believe Obama is more in touch with their needs, compared with 39% for Romney.

Obama leads by an equal margin when it comes to being in touch with the middle class, and six in 10 say Obama is in touch with the problems facing women today, with just over three in 10 feeling the same way about Romney.

Romney leads 48% to 44% over Obama on managing the government effectively and has a six-point advantage on having a clear plan for fixing the nation's problems. Both figures are within the survey's margin of error.


"The challenge facing Romney at the GOP convention is to build on those managerial strengths while at the same trying to convince average Americans that he is in touch with their problems. Obama's personal characteristics, for the moment, outshine Romney's," CNN Polling Director Keating Holland said.

On specific issues, the poll results show a similar dynamic: Obama is generally ahead on foreign policy and social issues, while Romney is generally preferred on economic issues.

Another new poll released Monday showed Romney and Obama neck-and-neck in Florida, a battleground state, and North Carolina, where the Democratic convention will take place next week.

Republicans say the Republican convention must focus on Romney's character and show how he can lead the nation to economic prosperity, which is the top issue with voters.

On the flight to Tampa Tuesday, Ann Romney joked to reporters that she would present her highly anticipated speech in a way those obsessed with social media could understand.

"The speech is being reduced to a tweet," she said of remarks expected to address concerns about her husband's perceived stiffness by presenting him in a more personal, softer light.

The Obama campaign, anticipating a Romney branding effort by Republicans, released a movie trailer-style video Sunday that previewed a "do-over" moment for Romney.

In a statement accompanying the video, the Obama campaign said it is "presenting Americans with an epic cinematic preview of Mitt Romney's 'convention reinvention' -- the Do-Over moment that voters have grown to expect -- because they've seen this movie before."

Responding to the video, Romney's campaign said Sunday the president was relying on "negative attacks" as a way to distract from his own record.

However, Los Angeles Mayor Antonio Villaraigosa told ABC that Romney is vulnerable to being portrayed as a political opportunist because of the right-wing positions he adopted during the rugged primary campaign against conservatives such as Rick Santorum and Newt Gingrich.

"I suspect that they are not going to be able to Etch A Sketch their way out of this campaign," Villaraigosa, a Democrat, told CNN, with a reference to a Romney aide's comment earlier this year about resetting the campaign message. "They're not going to be able to put away all the things they said in the primary and all the things they have in their platform right now."

The GOP platform contains traditional conservative planks, including support for a "human life amendment" that specifies no exceptions to a ban on abortion.

That runs counter to overall public opinion in America, especially among women, a demographic that polls show favoring Obama far more than Romney at this point.

Last week, controversial comments by conservative Republican Rep. Todd Akin of Missouri ignited a political firestorm about rape and abortion as the Romney team sought to build momentum up to the convention.

Akin, who won Missouri's Republican Senate primary to challenge Democratic Sen. Claire McCaskill in November, told an interviewer that women have an undefined biological response to what he called "legitimate rape" that oftentimes prevents pregnancy.

Romney and a full spectrum of GOP politicians, from the RNC to tea party groups, condemned Akin's comments and called for him to drop out of a race considered crucial to Republican hopes of winning a Senate majority.

Akin apologized and called his remarks incorrect, but he has refused to end his U.S. Senate bid. The imbroglio has given new life to McCaskill, considered the most vulnerable Democratic senator running, and caused chagrin within the Republican establishment.

A further concern is that Akin's comments focused attention on the volatile abortion issue in the run-up to the convention, when the Romney campaign wanted to talk about the candidate's prescriptions for high unemployment and slow economic growth under Obama.

Instead, Romney and Ryan, the conservative House Budget Committee chairman, have been asked repeatedly about differences between their personal views on whether abortion should be banned in all cases or permitted only for pregnancies from rape, incest or that threaten the life of the mother.

Romney's Mormon faith supports the narrow exceptions, while Ryan, a devout Catholic, supports a blanket ban. The campaign has made clear the ticket supports Romney's stance, which also contrasts with the party platform.

Boehner conceded Tuesday that the Akin controversy could hurt Republicans with women voters, a demographic that leans toward Obama. However, he noted that men favor Romney.

"If you look at this, we've had this gender gap, Democrats have had with men, Republicans with women, over the last 20 years and it's something I think both parties have to pay attention to and clearly we do as well," he said.