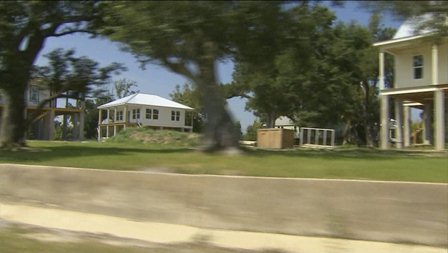 Concrete slabs and steps that lead to nothing but trash and overgrown weeds are all that is left of historic brick homes.

But amid the slabs are majestic homes with grand, sweeping porches and perfectly manicured lawns.

The owners of these homes are as tough and resilient as only survivors of one of the deadliest storms in history could be.

Lifelong Bay St. Louis resident Corky Hadden lives on the spot of his childhood home, set off the water where the bay feeds into the Gulf of Mexico.

While he and his family evacuated to safety inland, Katrina's ravaging storm surge swept the house right off its stilts, leaving only the foundation intact.

"We had some old columns that the old house stood on, and those columns were picked clean, there was nothing left on them," he said.

Determined, Hadden rebuilt where his boyhood home once stood, both stronger and higher.

"I've got poured concrete pillars filled with steel, 10 times more steel than before," he said. "We're now 24 feet above sea level, 11 feet from the ground."

Isaac could bring in a 12-foot storm surge, which would mean Hadden's first floor could take on some water.

"We don't have anything important below that 24-foot elevation," he said.

Air conditioning units and electric boxes are strategically placed on the house's second floor, safely away from most critical dangers.

Outside, the air is full of Isaac's portents. The normally calming sounds of the surf are dimmed by hurricane flags clanging loudly against an old converted ship mast in Hadden's front yard.

The blazing red flags with the signature black squares in the center stand out in stark contrast to the temporarily blue sky.

Hadden and his neighbors are wary but calm. "I think everybody has come back in a much stronger fashion," he said.

The stately green manse where Ben and Nancy Stone live right off the beach is a new construction, a near replica of the 1800s-era house that was obliterated by Katrina.

A portion of the second floor ended up in their neighbor's yard. In the debris, the Stones found a closet that contained the original floorplans.

Armed with the diagram and hard lessons learned post-Katrina, the family rebuilt.

"We prepared for everything we think would happen in a redo of Katrina," Ben Stone said.

The house is made of walls a foot wide, windows that can withstand 200 mph winds, and sports steel beams that tunnel into the ground.

"This is a special place for us. We like to get up in the morning, and first thing I do is look out to the Gulf. It gets angry from time to time, but it's the most beautiful sight I see," Stone said. "I was not going to live the rest of my life without coming back here."

The vacant lot next door is where Sissy Leatherman's mother used to live.

"After Katrina, she was like 'Huh-uh, I'm getting out of here,'" Leatherman said. Her mother, like herself, moved inland away from the Gulf's reach.

Leatherman and her husband spent some time on Gulfport's beach Monday so their twin girls could enjoy some outdoor fun.

"I told them it's literally the calm before the storm," she said.

Like many other Gulf Coast Mississippians, Leatherman is ready for Isaac, and other storms that may loom.

"We aren't too worried. I don't think it'll be that bad," she said. "But we know a Katrina will happen again. We know it will."