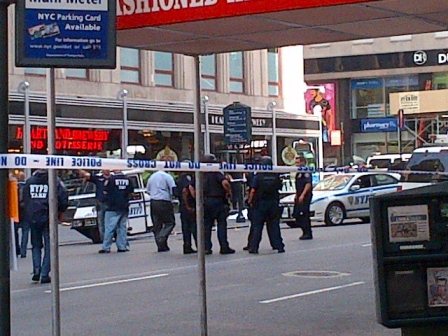 NEW YORK (CNN) -- The man killed by a former co-worker on a Manhattan sidewalk Friday was shot five times in the head, the New York Medical Examiner's office said Sunday.

Ercolino died from head wounds, but he also suffered "a graze wound to the chest, but nothing that would have killed him," said Ellen Borakove, the medical examiner's spokeswoman.

Two officers responding to the shooting fired 16 rounds at Johnson, a disgruntled former apparel designer, killing him after he engaged in a gunbattle with police, authorities said.

Johnson, who served in the U.S. Coast Guard in the mid-1970s, had two rounds left in his pistol. It holds eight, New York Police Commissioner Ray Kelly said Saturday.

Nine pedestrians suffered bullet or fragment wounds in the hail of gunfire, all from shots fired by police, Kelly said. Three passers-by sustained direct gunshot wounds, while the remaining six were hit by fragments, Kelly said.

One officer shot nine rounds and the other shot seven.

Ercolino had apparently filed a prior complaint against his assailant, claiming that he thought Johnson would eventually try to kill him.

Johnson was apparently laid off from his job as a designer of women's accessories at Hazan Import Co. last year.