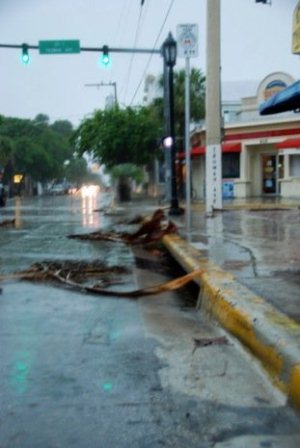 TAMPA, Florida (CNN) -- As the seventh anniversary of Hurricane Katrina's landfall approaches, New Orleans -- and much of the Gulf Coast -- is preparing to put into practice the lessons learned from that defining storm.

Tropical Storm Isaac is following a path eerily similar to Katrina's in 2005.

There are some obvious differences -- Isaac is much weaker than Katrina -- but the storm nonetheless will require Louisiana, Alabama and Mississippi to execute emergency management plans that were partly shaped by Katrina.

Thousands in the Louisiana, Mississippi and Alabama on Monday were told to evacuate their Gulf Coast homes.

But Ryan Unger, of St. Charles Parish, next to New Orleans, is one of the residents planning to stay in place despite an evacuation order. He filled up tanks Sunday night in case he has to run his generator.

"Starting to get a little sense of anxiety, like, OK, am I ready for it?" he said. "Realizing we ain't really ready for a storm. So we're just all thinking about what we gotta do to get in place to get ready for it."

On Monday morning Isaac was centered about 360 miles southeast of the mouth of the Mississippi River. It is forecast to become a hurricane "in a day or so," the National Hurricane Center said.

The governors of the three imperiled states each declared an emergency, with Alabama Gov. Robert Bentley ordering mandatory evacuations for residents who live along the coast and for those in some low-lying areas inland.

"I am urging everyone to take precautions now, monitor weather warnings, and be prepared for whatever Isaac may bring," Bentley said in a statement released Sunday.

Some 9,000 residents in Jefferson Parish, Louisiana, were ordered to evacuate Monday morning. The towns of Jean Lafitte, Crown Point and Barataria are affected.

Louisiana Gov. Bobby Jindal called on residents in coastal parishes prone to flooding to voluntarily evacuate. A mandatory evacuation was ordered for St. Charles Parish and for parts of Plaquemines Parish.

Even pro football player Courtney Roby of the New Orleans Saints was a little nervous.

"Kinda a scary feeling of uncertainty," he said via Twitter.

A hurricane warning was issued for the northern coast of the Gulf of Mexico, from Morgan City, Louisiana, east to Destin, Florida, the National Hurricane Center said.

The storm was expected to make landfall late Tuesday or Wednesday, coinciding with the seventh anniversary of the arrival of the much stronger Hurricane Katrina.

Isaac's strength was holding steady Monday as it moved at 14 mph through the warm Gulf waters, forecasters said. The storm had maximum sustained winds of 65 mph, according to a hurricane center advisory.

The storm is "getting a little better organized" as it moves over the Gulf of Mexico, the center said.

In the coastal Mississippi city of Pass Christian, people were moving their boats to higher ground and preparing their homes.

"Lookin' like we're gonna be ground zero again," said Daryl Vaught, as he prepared to place sandbags in front of his doors and garage.

It appeared early Monday that the storm's ferocity would mostly bypass Florida's west coast and the Republican National Convention in Tampa, where the schedule was pushed back a day by organizers over concerns about the storm.

Isaac's eye is forecast to pass well west of Tampa.

Still, Isaac's reach is so large that Florida was getting heavy doses of rain and wind.

According to the hurricane center, tropical storm-force winds stretch 240 miles from the storm's center. To put that in context, if the center of Isaac were located in Washington, its winds would be felt in New York City and Raleigh, North Carolina.

In Pompano Beach, Florida, Scott Segal put up hurricane shutters outside his condo as the rain came in horizontally.

"The wind is getting stronger, and the ocean is starting to build, and the waves are getting bigger," he said. "I am prepared, but not nervous."

Frank Guida was hunkering down in Fort Lauderdale.

"You can see everything is moving in the same direction, like the palm trees and the shrubs. I can hear shutters shaking," he said. Despite the intensified rainfall, he stocked up on water and food, and was staying at home.

After slamming into Haiti, where at least six people died in storm-related incidents Saturday, Isaac lashed Cuba and the Florida Keys.

There are so far some eerie similarities between Hurricane Katrina and Isaac, CNN meteorologist Dave Hennen said.

The forecast track for Isaac and the one for Katrina in 2005 are almost identical, he said.

"Hurricane Katrina went on to become a dangerous Category 5 hurricane in the central Gulf of Mexico," Hennen said.

"We are just on high alert. I know the anxiety level is high," New Orleans Mayor Mitch Landrieu said.

"The storm is somewhat uncertain. Out of an abundance of caution, we will begin to take these precautions as quickly as we can."

Currently, there are no plans to order evacuations of New Orleans. If an evacuation is ordered, buses and trains would be used to move residents out of the city, Landrieu said.

The airport, the convention center and the Superdome would not be shelters of last resort as they were in 2005.

"We are much, much better prepared structurally than before," he said, adding that "if you are called upon, you should leave."

Eight oil rigs and 39 production platforms in the gulf were evacuated by late Sunday, according to the U.S. Bureau of Safety and Environmental Enforcement. BP said it would evacuate its oil platform workers Monday.

"ExxonMobil continues preparations for heavy weather associated with Tropical Storm Isaac at its Gulf of Mexico and Mobile Bay operations," a statement on the company's website said early Monday. "We are closely monitoring weather updates, determining which of our facilities may potentially be in the path of the storm and preparing those structures for heavy wind and rain."

"We are experiencing some minor outages in the southern part of the state," he said at a news conference in Tampa. He said his main concern for Tampa was no longer a direct hit from Isaac but tropical-storm-force winds.