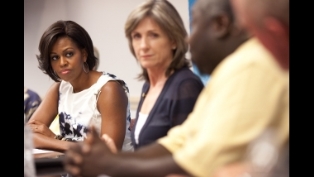 The shooting -- which left six people dead and four others wounded -- occurred August 5 at a gurdwara, or Sikh house of worship, in Oak Creek. The gunman, identified by police as 40-year-old Army veteran Wade Michael Page, later killed himself.

On Thursday, the first lady first met with the gurdwara secretary Kulwant Singh Dhaliwal and Mayor Stephen Scaffidi in the hallway of Oak Creek High School.

"It's my honor to be here with you," Obama told them, according to a pool report. "I'm sorry it's under these circumstances, but I am anxious to meet with the families and lend whatever support I can."

One of the survivors Obama met was Santokh Singh, who was released from the hospital last week. He underwent two surgeries after suffering a gunshot wound that penetrated his chest, diaphragm, stomach and liver.

"He can hardly walk or stand because of the stitches, but we're going," said his nephew, Gurjeet Singh.

Dhaliwal did not attend the meeting with families, but said he was touched by Obama's concern.

"It was very graceful of her. It means a lot to us," he said.