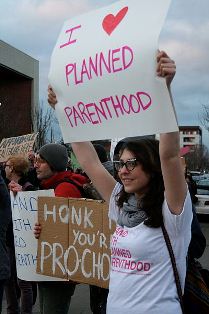 (CNN) -- A federal court has ruled in favor of Texas, which wants to ban state funding for Planned Parenthood affiliates participating in a health program for low-income women because the family planning network performs abortions.

The ruling vacated a lower court's preliminary injunction and opened the way for Texas to sever money to clinics affiliated with Planned Parenthood, the nation's largest abortion provider, which has come under recent attack from anti-abortion politicians.

"Today's ruling affirms that Texas' Women's Health Program has no obligation to fund organizations that promote abortion -- including Planned Parenthood," Perry said. "The 5th Circuit's decision is a win for Texas women, our rule of law and our state's priority to protect life."

Texas opposed government funding for Planned Parenthood clinics because the organization provides abortions and has been in a long-running battle with the federal government.

The state said in March that it was willing to give up funding from Washington and run the Women's Health Program itself.

In a letter to Texas officials in March, Medicaid Director Cindy Mann said the state's decision was regrettable. It would, she said, "prevent women enrolled in the program from receiving services from the trusted health care providers they have chosen and relied on for their care."

Planned Parenthood sued Texas, winning an injunction against the law by arguing that abortion is constitutional and Texas' efforts would block women's access to preventive health care.

"We're not ending funding for Planned Parenthood," he said. "I think women should have control of their own health care choices, just like men. We're not going backwards."

Perry lashed out at Obama on Tuesday.

"Texas will continue providing important health services for women through this program in spite of the Obama administration's disregard for our state law and unilateral decision to defund this program," he said.

The program does not pay for abortions, and participating Planned Parenthood clinics in Texas do not perform the procedure.

But Texas lawmakers object to Planned Parenthood because the organization is the nation's leading provider of abortions and is a vocal advocate for abortion rights, Gov. Rick Perry and Republicans in the Legislature have worked to cut off its state money.

Planned Parenthood says 3% of all its health services are abortion services. But under the Texas program, neither the agency nor its affiliates perform the procedure.

The court's decision Tuesday serves as a setback for Planned Parenthood and abortion providers, under attack from conservatives across the nation who say government dollars should never support abortions.

In 2011, 21 states passed laws that restricted a woman's access to an abortion, according to the American Civil Liberties Union. Nine states have imposed restrictions on family planning funding, according to the Guttmacher Institute, an advocacy group for abortion rights which has argued a trend of anti-abortion hostility is running through state legislatures.

Last year, Texas enacted a law that tried to require a woman seeking an abortion to hear the description of an ultrasound of the fetus, even if she objects. The law has been challenged in court. Texas also slashed funding for family planning clinics.

Perry praised Tuesday's court ruling as "a win for Texas women, our rule of law and our state's priority to protect life."