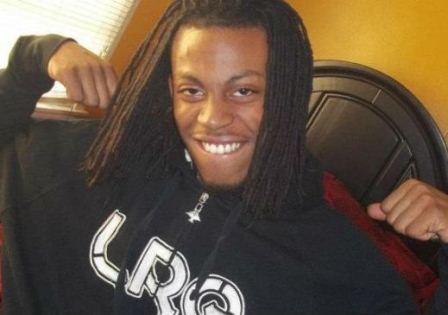 (CNN) -- The Arkansas medical examiner has ruled the death of a man shot while handcuffed in the back of a police car as a suicide, the state crime lab announced Monday.

Chavis Carter, 21, died July 29 while in the back of a Jonesboro, Arkansas, police car. The police report from that night shows officers detained Carter after learning there was a warrant for his arrest in Mississippi and searched him twice before leaving him handcuffed in the backseat of a patrol car.

"At the time of discharge, the muzzle of the gun was placed against the right temporal scalp," the crime lab's report states.

Police said they discovered a .380-caliber Cobra semi-automatic pistol when the found Carter's body slumped over.

Many people in Jonesboro were skeptical about the shooting, as was Carter's mother.

"I think they killed him," Theresa Carter told CNN on Wednesday. "I mean, my son wasn't suicidal."

She also said her son was left-handed and had called his girlfriend to tell her he would contact her from jail.

She wondered how police could find a bag of marijuana and not find a gun when they searched her son.

There have been several protests in Jonesboro by citizens who don't believe the police explanation.

Police have released a video in which an officer dramatizes how someone could shoot themselves while in the back of a police car. The officer was the same height and build as Carter, police said.

They also have released the interview room video of a witness who said police were standing outside the car when a shot was fired.

The autopsy also showed that Chavis Carter tested positive for marijuana, amphetamines (including meth) and benzodiazepines, classified by the U.S. Drug Enforcement Administration as depressants.

Jonesboro police said the investigation into Carter's death is ongoing.