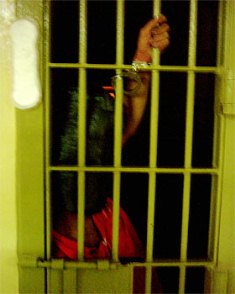 CLAREMONT, Calif. – When a number of formerly incarcerated women last year received what they thought was a distress e-mail from a friend, Gloria Killian, saying she was stranded in Scotland penniless and needed to have money wired to her ASAP so she could fly back to California, at least two of them rushed to their banks to see how much they could pull out.

Another decided she would send Killian everything she'd been saving up – more than a years worth of savings -- to put herself through school.

Some of Killian's more streetwise friends, however, decided they would check the authenticity of the e-mail before deciding how they could help. That morning, Killian said, "my phone rang off the hook."

She quickly went online and alerted her contacts about the email hack.

"The fact that so many friends were ready to jump in to help, shows we are there for each other," said Killian, 65, who had spent the better part of two decades inside a California prison, for a crime she didn't commit.

Exonerated in 2002, Killian is now the executive director of the Action Committee for Women in Prison. She is also the co-host and co-founder of the weekly webcast, "Women Behind the Walls," the only show in the United States that is by, for and about incarcerated women.

Many of the women who rushed to Killian's aid were there for each other even while incarcerated in the California Institution for Women (CIW) in Corona. They formed bonds behind bars that only grew stronger after they were released, observed Killian.

"Women prisoners allow their personalities to come out, and friendships develop," noted Wayne Davison who, during his 25-years as a prison warden in California, worked in both women's and men's prisons. "They form families."

It wasn't long before 16-year-old LaKeisha Burton – at the time of her trial, she was the youngest female ever to be tried as an adult in California -- became a part of one of those families, after she landed in the Corona prison in 1989 on an attempted murder conviction. The wide-eyed girl with a megawatt smile immediately became "little sister" to some of the inmates, and "daughter" to some others.

"When we see a 'new baby' in our world, we instinctively feel we need to make sure she knows how to take care of herself," said Robin Keeble, 55, an organizer of AKA Angels, a statewide network of formerly incarcerated women started in 1996 by the women themselves. "Some women look at the newcomer and say, 'Oh my gosh, she is the same age as my daughter. I can't take care of my daughter, so let me take care of her.'"

Keeble, who spent a total of 20 years in California's prisons on multiple convictions – her first was for burglary at age 20 and she was subsequently locked up for drug-related offences – noted, "Just because you are in prison doesn't mean your maternal instincts are dead."

Dawn Davison, a former warden at CIW who was hugely popular among the prison's inmates due to reforms she put in place there, would be the first to agree: "Women are still women when they go behind prison walls."

They might fight and argue, she said, but "it's mostly over relationships."

"The sisterhood between them is so strong that when a woman gets out, those left behind – even lifers who know they never will -- wish her well," Davison remarked.

Burton, who is now 33 and has been out of prison for six years, said she still has formerly-incarcerated friends watching her back. Clad in a pretty, ankle-length floral frock, she dropped in at Killian's Claremont home one recent day to say hello. She considers Killian among her cheerleaders, encouraging her to bigger and better things.

Bonding the way women prisoners do is not as common among their male counterparts, some prison officials say.

Tseday Aberra, senior psychological supervisor at CIW, who worked for nine years in a male prison prior to her current job, observed: "On the instinctive level, women do better in a network – you see this on the outside, as well. They do better when there are people in their lives."

The way men socialize, on the other hand, is through an activity or engagement, Aberra said. And there's not necessarily the kind of emotional connection between them that women have, she continued, nor do they depend on each other for emotional support.

Wayne Davison, the husband of Dawn and also a retired prison warden, said he frequently observed this. Women inmates seen huddling together in prison yards, he said, were more likely to be nurturing each other and offering words of encouragement than "plotting," which is what he observed often with the men. In prison, bonding between men can often manifest as gang activity.

"With the men, there's a pecking order in which race is often involved," noted Wayne Davison. Friendships between male prisoners, he said, are made mostly to protect themselves; once released, they often go their separate ways.

Reuniting on the outside

A week before Christmas last year, Killian again hosted what has become a popular annual "Convicts Christmas Potluck Party" at her home in Claremont.

"It's probably my sick sense of humor that made me give it that name," Killian said with a laugh, when asked how she came up with the title.

By prior arrangement, it was agreed that everyone attending the party would leave with just one present. Partners and other family members were welcome, but alcohol was taboo. "You don't need to drink to have fun," Killian said.

About 60 people, most of them women, showed up. Three women who'd been out of prison for less than 72 hours were among the guests.

There was a lot of catching up to do; stories to be shared. And even though there "was a lot of tears," noted Killian, "everyone seemed happy to be back together again." And, as it always happens, new friendships were struck and new networks formed.

Keeble, whose 82-year-old aunt recently broke her dentures and couldn't afford to get a new set, tapped into one of those networks. She sent them to Dee Cliburn, a fellow ex-inmate who knows how to mend broken dentures.

"It was nothing, really," Cliburn said with a grin. "I just glued the broken parts together."