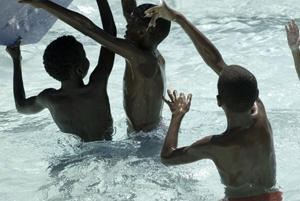 (CNN) -- A now defunct suburban Philadelphia swim club has agreed to a settlement more than three years after being accused of racism and discrimination for denying children from a largely minority day-care center access to their facility, the U.S. Justice Department said.

Under the terms of the deal with the Justice Department and the Pennsylvania Human Relations Commission, the Valley Club of Huntingdon Valley -- which filed for bankruptcy in November 2009 and had its property sold for $1.46 million the following June -- agreed to payouts to more than 50 children who were part of the Creative Steps Day Care Center, their counselors and Creative Steps itself.

The distributed money includes whatever "remaining assets" from the sale of the club's property to Congregation Beth Solomon of northeast Philadelphia are leftover, once closing costs and associated fees have been covered, the Justice Department said Thursday in a press release.

The settlement also sets aside $65,000 to create a leadership council made up of former Valley Club members, Creative Steps counselors, campers and their families.

"No one may be denied the right to use a swimming pool because of their race or the color of their skin," said Thomas E. Perez, the assistant attorney general heading the federal department's civil rights division.

Creative Steps, a day-care center based out of northeast Philadelphia, had paid the Valley Club $1,950 in June of 2009 so its children could access its pool over the summer.

"I was excited," Alethea Wright, founder of Creative Steps, told CNN at the time. "The children were excited, and parents were excited."

But when the young day campers came to the club for the first time, "the children reported hearing racial slurs while enjoying the pool," the Justice Department said Thursday.

Marcus Allen, who was 12 at the time and a camper with Creative Steps, recalled some club members asking, "Why are these black kids here? They might steal from us."

"It's kind of sad that people are still thinking like this," Allen said then, with tears streaming down his face, "I thought those days were over."

On July 3, 2009, "the club refunded the day camp's membership fee and prohibited the children from returning to swim," the Justice Department said.

The club later issued a response denying that race had anything to do with its decision to exclude the children, contending instead that "we underestimated the capacity of our facilities."

Around that time, Wright repeatedly lambasted the club for its tepid response to the accusations and said the children in her care were "emotionally damaged" by the incident.

A few months later, in November 2009, the swim club filed for bankruptcy because of legal bills and liabilities tied to its decision to cancel swimming privileges for the day-camp children. The following January, the U.S. Justice Department opened its investigation into the racial discrimination allegations.

The settlement detailed Thursday closes a key chapter in the saga, with one Pennsylvania official saying she hopes the entire, public ordeal makes it less likely discrimination will happen in the years to come.

"Our hope is that this case serves as prevention for years to come and a reminder that discrimination is illegal, and has no place in Pennsylvania," said JoAnn Edwards, executive director of the Pennsylvania Human Relations Commission.

CNN's Ross Levitt and Susan Candiotti contributed to this report.