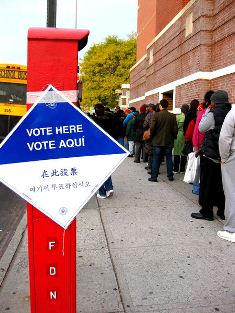 (CNN) -- A Pennsylvania judge on Wednesday decided not to restrict a controversial voter ID law from going into place.

The law, which requires voters to present a state issued photo ID, has been met with fierce opposition by those who claim that the law discriminates against minorities.

In the Keystone State, the issue has largely been divided along party lines. Republicans argue the new law helps to fight fraud, while Democrats make the case that the new law aids Republicans in the voting booth by limiting turnout by minorities in the crucial battleground state.

But Judge Robert Simpson, with the Commonwealth Court of Pennsylvania, on Wednesday issued an order expressing no constitutional reason to stop the law from taking effect, despite writing in his decision that he had "sympathy" for the witnesses.

"At the end of the day, however, I do not have the luxury of deciding this issue based on my sympathy for the witnesses or my esteem for the counsel. Rather, I must analyze the law, and apply it to the evidence of facial unconstitutionality brought forth in the courtroom, tested by our adversarial system," Simpson wrote.

The American Civil Liberties Union of Pennsylvania, the Public Interest Law Center of Philadelphia, the Advancement Project, and the law firm of Arnold & Porter will be appealing to the Pennsylvania Supreme Court, according to a statement from the ACLU of Pennsylvania.

In late July, the Justice Department began a formal investigation into whether the state's requirement violates civil rights laws, saying the state had 30 days to provide the requested documents.

Pennsylvania is the first state outside of the areas covered by Section 5 of the Civil Rights Act designed to protect minorities in states with historic racial discrimination in voting, to be investigated. To date the Justice Department has already filed suit against two states: South Carolina and Texas. Officials are awaiting a ruling by a panel of federal judges in Washington, D.C., on a Texas case argued in early July. Judges have scheduled a hearing on the South Carolina case later this summer.

The Civil Rights Division has taken an aggressive approach to challenging voter photo-ID laws, which many Democratic and minority groups claim is an effort by Republican-controlled state governments to suppress voter turnout. Republicans have charged the challenges reflect purely partisan politics designed to enhance minority turnout at the polls.