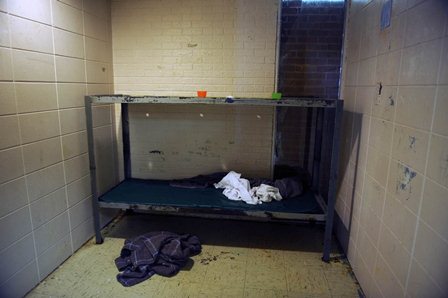 (CNN) -- Officials in Lauderdale County, Mississippi, have operated "a school-to-prison pipeline" that violates the constitutional rights of juveniles by incarcerating them for alleged school disciplinary infractions, some as minor as defiance, the U.S. Department of Justice said Friday.

"Students most affected by this system are African-American children and children with disabilities," the Justice Department said.

The federal agency's civil rights division seeks "meaningful negotiations" in 60 days to end the constitutional violations or else a federal lawsuit would be filed against state, county and local officials in Meridian, according to a Justice Department letter dated Friday to those officials.

"The systematic disregard for children's basic constitutional rights by agencies with a duty to protect and serve these children betrays the public trust," Thomas E. Perez, assistant U.S. attorney general, said in a statement. "We hope to resolve the concerns outlined in our findings in a collaborative fashion, but we will not hesitate to take appropriate legal action if necessary."

In 2009, the Lauderdale County Juvenile Detention Facility in Meridian was the target of a federal class-action lawsuit by the Southern Poverty Law Center that alleged children and teens were subjected to "shockingly inhumane" treatment, the center said.

The alleged mistreatment included youngsters being "crammed into small, filthy cells and tormented with the arbitrary use of Mace as a punishment for even the most minor infractions -- such as 'talking too much' or failing to sit in the 'back of their cells,'" the center said in a statement.

In 2010, Lauderdale County officials and the center reached an agreement to reform the jail system and consider alternatives to sending youths to the detention center, said the Southern Poverty Law Center, a nonprofit civil rights group.

"I think this is evidence of a broken system where the most vulnerable population of kids are not receiving their constitutionally guaranteed rights," Jody Owens II, managing attorney for the center's Mississippi office, told CNN.

On Friday, the U.S. Justice Department accused Meridian police of automatically arresting all students referred by the city's public schools and then sending them to the county juvenile justice system, "where existing due process protections are illusory and inadequate," the federal letter says.

The police department command staff and officers characterized their agency as a "taxi service" for the schools and juvenile detention facility, without assessing the circumstances of the alleged charges against students, the Justice Department said.