Detroit Loses One of Two Black Congressmen in Primary 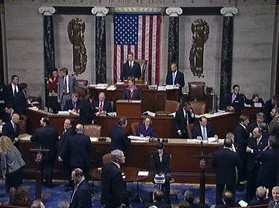 DETROIT (AP) -- U.S. Rep. Gary Peters won a faceoff with a Democratic colleague that will leave Detroit without two black members of Congress for the first time in nearly a half-century, but John Conyers -- one of the founders of the Congressional Black Caucus -- easily survived a crowded primary fight of his own.

In another closely watched primary race Tuesday, Republican tea party favorite and political novice Kerry Bentivolio prevailed over a former state senator in the district abandoned by former Rep. Thaddeus McCotter, who resigned after failing to produce enough valid petition signatures to qualify for the ballot.

Detroit has had two black representatives since 1965, when Conyers took office alongside then-Rep. Charles Diggs. But the GOP-controlled Legislature added suburban territory to the city's two districts after results of the 2010 census dropped Michigan's House delegation from 15 to 14.

By clinching the Democratic nomination, Conyers is considered the overwhelming favorite to win a 25th term in November.

But Peters, who is white, defeated Rep. Hansen Clarke in a newly drawn, oddly shaped district that winds from downtown Detroit to Pontiac more than 30 miles northwest. Clarke is the son of a South Asian man and a black woman.

Peters said he gained the confidence of black voters in the majority-minority district with extensive outreach and a focus on results. He visited about 50 black churches and won endorsements from Detroit Mayor Dave Bing and an activist group called The Black Slate, as well as leading unions and the Detroit Regional Chamber.

``Our record of getting things done was certainly a powerful message in a region and a city that are looking for practical problem-solvers,'' he told The Associated Press.

Conyers, 83, proved his staying power after doubters questioned whether the civil rights icon could survive in his reconfigured district. He brushed aside challenges from four Democrats, emphasizing his seniority and status as the House Judiciary Committee's ranking minority member.

``I think that helped me overcome the fact that there were so many new parts in the district,'' he said.

The bizarre unraveling of McCotter's political career may have given Democrats an opening to pick up a seat that previously appeared beyond their grasp in a mostly Republican suburban Detroit district. He abruptly stepped down in July after faulty -- and possibly fraudulent -- petition signatures barred him from the ballot.

Local GOP leaders threw their support behind Nancy Cassis, a former state senator who spent $200,000 of her own money on a last-minute write-in campaign. But Bentivolio, a former teacher and reindeer farmer who was already on the ballot, easily won what he called ``a great victory for the grass roots.''

Democrats will counter with Syed Taj, a doctor and Canton Township trustee who defeated Bill Roberts, a supporter of political extremist Lyndon LaRouche.

``The people of the 11th District will have a choice: more Republican obstruction and gridlock or a forward thinking physician with a proven track record of success,'' Taj said.

Elsewhere in Michigan, veteran Rep. Fred Upton won a rematch with Jack Hoogendyk, a former state representative from Kalamazoo County's Texas Township whom Upton handily defeated two years ago. Long-timer John Dingell and Reps. Mike Rogers and Tim Walberg won re-nomination over token opponents. Steve Pestka won the Democratic nomination to challenge Rep. Justin Amash, who had no opposition in his bid for re-election in a district including Grand Rapids.

Hoogendyk contended Upton, a 25-year incumbent and chairman of the House Energy and Commerce Committee, wasn't conservative enough, although Upton is a sharp critic of the Obama administration's health care and environmental policies and has the endorsement of Right to Life of Michigan. He raised $3.1 million to about $123,000 for Hoogendyk.

``The base that would be inclined to vote for me, a tea party conservative, is much more motivated to get to the polls on election day than his forces are,'' Hoogendyk said.

Upton said Hoogendyk would never match his seniority and influence, but insisted he was taking nothing for granted.

``You run two ways -- unopposed or full speed ahead,'' Upton said. ``Whether it's last time or this time, we're doing ... all the things to make sure that when you wake up the next day that there was nothing that you should have done.''