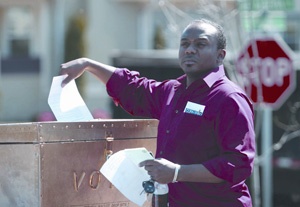 Pennsylvania's voter photo ID law is an exercise in pure partisan politics meant to tilt the state toward GOP candidate Mitt Romney, said State Sen. Vincent Hughes (D), who added that costs and other obstacles associated with the law make it, in essence, a poll tax.

Speaking to media during a teleconference convened Tuesday by New America Media and the Brennan Center for Justice, Hughes said the law would force voters "to have to pay money or to jump through hurdles to exercise your Constitutional right, which is your right to vote."

A hearing that will determine whether or not the law will take effect in November concluded Thursday in Harrisburg, with lawyers for the plaintiffs claiming there is "no good reason" why it needs to be implemented. State attorneys countered opposition to the law has been built largely on "emotional appeal."

Commonwealth Court Judge Robert Simpson said he would issue his ruling later this month. Both sides said they would appeal to the state Supreme Court if the decision goes the other way.

Having served more than 25 years in the legislature, in both the House and the Senate, Hughes said during the teleconference that he never thought he would be fighting for victories to gain access to the ballot box that were won decades ago.

He also highlighted a statement by Republican House Majority Speaker Mike Turzai that was captured on video and has since been making rounds on the Internet. In his remarks, Turzai tells a GOP state committee meeting the law will allow "Romney to win the state of Pennsylvania."

For Hughes, Turzai's boast corroborated what many critics of voter photo-ID laws have long charged but have been unable to substantiate, that the intent of photo-ID laws is to suppress voter turnout among constituencies – especially young and minority voters – that have tended to vote Democratic.

Penda Hair, co-director of the civil rights group Advancement Project, said it is precisely because Turzai's statement shows intent that his words were introduced as part of the court record in the legal case challenging the law.

Hair, who joined Tuesday's call, said her organization is one of several representing plaintiffs in the case.

Though voting Democratic in recent presidential elections, Pennsylvania is considered a critical swing state with 20 electoral votes that could make the difference in a closely contested race. Current law requires identification only for people voting in a polling place for the first time and allows non-photo documents such as a utility bill.

Wendy Weiser, director of the Brennan Center's Democracy Program, said Pennsylvania's struggle over the voter photo-ID law is one of the "most significant battles in the war on voting."

There have been "concerted efforts over the past two years to push laws that make it harder for eligible voters" to cast ballots, she said, adding the voter photo-ID law in Pennsylvania and seven other states "are not reasonable" because they severely limit the forms of ID that typically would be deemed acceptable at the polls.

"Seniors, veterans, minorities and students" are the most negatively impacted groups countrywide because of the hurdles they would have to overcome and the costs they would incur to obtain the ID required, she said. "The numbers of voters that could be affected by the new ID requirements are especially stark in Pennsylvania."

According to Pennsylvania's recently revised estimates, some 758,000 registered voters – between nine and 10 percent of the total -- may be subject to the new photo-ID requirements.

Weiser noted that number rises to 18 percent of registered voters in Philadelphia. Thus the constituencies of Sen. Hughes and other legislators who represent the city and its higher concentration of African-American and Latino voters are in the bull's eye of the photo-ID storm.

Hair, pointing out the state's numbers only take into account registered voters, said expert testimony during the trial estimated that 1.2 to 1.5 million eligible voters could eventually be affected.

One of them would be Philadelphia resident Ana Gonzalez, a Puerto Rico native who spoke of her own difficulty in obtaining the paperwork necessary for a voter ID. "Voting is very important to us," she said of her family's sense of civic responsibility during the teleconference, adding that being unable to source her birth certificate from Puerto Rico means she may not be able to get her photo ID in time for the elections.

Hair cited another case involving a Pennsylvania woman born in Virginia with the assistance of a midwife. Because no birth certificate was issued, Virginia has told her she doesn't exist. She has voted in past elections using other ID but the new law's requirements may force her to the sidelines in November.

Speakers also voiced concern the state will be unprepared to deal with the likely influx of requests for necessary documentation in time for voting. Hughes in particular took issue with the law's purported rationale, namely the elimination of voter fraud.

Republican Gov. Tom Corbett, said Hughes, "never prosecuted one case of voter fraud in his entire eight years" as attorney general of the Commonwealth of Pennsylvania. The state has conceded that it has no history of voter impersonation, the fraud a voter photo ID would presumambly remedy.