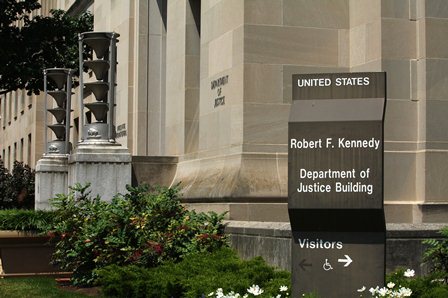 WASHINGTON (CNN) -- Eight employees of the management division of the Justice Department violated laws and regulations by seeking to have their relatives hired for high-level jobs in the department, or ignored evidence of such violations, according to an inspector general's report released Thursday.

The inspector general alleged "collusion between the Department of Justice's Office of Personnel and the Facilities and Administrative Services staff to illegally hire each other's family."

Human Resources Assistant Director Pamela Cabell-Edelen and Facilities and Administrative Services Director Edward Hamilton hired each other's children, the report says. Hamilton chose Cabell-Edelen's daughter to be his secretary in 2009. Hamilton then promptly began pushing a job for his son in Cabell-Edelen's office, and the son was hired.

Both executives are accused of lying to inspector general investigators about their actions, the report says.

The Justice Management Division is an important part of the Justice Department, as it is responsible for a wide range of issues including the Justice Department budget, financial matters, human resources, facilities and administrative services. It is the only division headed by a career employee rather than a presidentially nominated employee.

Assistant Attorney General for Administration Lee Lofthus has headed the division since 2006. He is a 30-year Justice Department employee who worked his way up through the ranks as a financial officer and controller.

Both the son and the niece of the senior adviser to the deputy assistant attorney general for human resources were hired for posts on the finance staff and human resources staff, the report says.

Also, the report says both the nephew and the cousin of the human resources director were hired to the National Security Division and the budget staff, respectively.

The inspector general noted the 2008 report had recommended "remedial ethics training and the establishment of a zero tolerance policy" for future violations of this type.

The report scolds Mari Barr Santangelo, who was responsible for implementing the recommendations and taking necessary actions. Investigators said she had made only "limited inquiries"

"In sum, we believe that there were management deficiencies in Santangelo's supervision of hiring practices in (the Justice Management Division) and we refer this report to (the division) for the action that it deems appropriate," the report says.

Cabell-Edelen has retired. Others the report says were involved could face disciplinary action meted out by Lofthus and the Justice Management Division.

In September 2010, a former Justice Department employee informed Rep. Frank Wolf, R-Virginia, chairman of the Justice Appropriations subcommittee, that the improper practices were continuing. He passed the information to the department's inspector general, triggering the latest investigation.