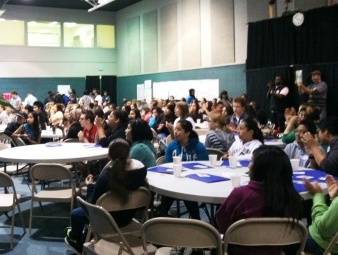 Nick Smith was shuttled from high school to high school in recent years, whenever a relative died or was shot.

When his mother died of cancer three years ago he moved from San Ramon Valley High School to San Leandro High so he could live with his older brother. When his brother was shot and killed, he moved to Oakland to live with another brother. By the time he got to Oakland Technical High School his senior year, he discovered he hadn't taken enough core academic courses to graduate. Nobody had counseled him to take the right classes; indeed he did not have any adult in his life he could turn to for advice.

"Teachers can't interpret a student's situation," Smith said of what it was like to be in school during all the rocky and sad events of the past few years. "They didn't know what was going on."

Adding to the wounds, staff at some of the high schools did not seem to expect much from him or care one way or another what happened to him.

"At San Leandro, they gave me just about all elective classes and hardly any core courses or A-G courses," he recalled of his junior year. "They didn't put me in any of the classes I was in at my other school."

But despite the turmoil in his teen years, Smith succeeded.

The 18-year-old graduated last June from Dewey Academy high school where he was editor of the school newspaper and voted most likely to succeed by his classmates. The Oakland public high school is a small, close knit campus where students get a "second chance" to earn the credits they need to graduate.

Now Smith is a mentor in the the African American Male Achievement Initiative in the Oakland Unified School District and is taking classes at College of Alameda, having just completed a paid internship at Kaiser Permanente.

What made the difference in Nick's life that allowed him to persevere as a student despite losing his parent and being faced with violence and constant relocation? What does it take to break the school to prison pipeline that students from low income and troubled home lives often get pushed into?

"At Dewey, it wasn't like teachers always telling you 'I know you can do better.' It was like 'I know you are smart and I believe in you.' That was different," Smith said, when asked what gave him the strength to persevere. "We all supported each other - teachers and students."

In a word, he found caring adults and mentors who believed in him while he attended school in a safe and secure environment. His natural intelligence and interest in learning were able to blossom when those mentors and teachers had high expectations of him.

Hattie Tate, one of his mentors as the former principal of Dewey and now department administrator for OUSD's Full Service Community Schools program, said kids need three essential things be able to learn and succeed.

"The first thing a child needs to be able to learn is to feel safe," said Tate, describing a philosophy that has fueled her work in OUSD and is the subject of doctoral dissertation.

In neighborhoods where gunshots can be heard most nights and pimps lure or kidnap adolescents as they walk to school, some kids just do not feel safe. So Tate - who also is a transition coordinator for youth returning to school from the juvenile justice system - said the schools need to go above and beyond to make themselves safe havens for their students.

The second need a child must have answered so he or she can learn is a caring relationship with an adult who believes in them, Tate said. Thirdly, a child needs to have high expectations set for them.

"You establish a relationship based on expectations of success," Tate said, describing the core direction she has given her staff at Dewey and at her other jobs in OUSD. "You build relationships with them they may have never had before."

Eric Young, 18, who graduated from Dewey in 2011, is now an intern with the African American Male Achievement Initiative and has a job leading an after school program at MetWest High School.

While you'd never know it from his gentle ways and sincere eyes, Young was once the type of kid that statistically is likely to wind up in prison. He was often suspended from high school and even expelled from a couple. He was often in trouble, he said, because as he described it, he had to fend for himself from the age of 12 since "my family was struggling."

Young went to six different high schools in the four years from ninth to 12th grades, sometimes because of his family's instability and once or twice because he was "kicked out" of a school.

But Young likes to read and is adept at doing research online. When he arrived at Dewey Academy, some teachers noticed how smart he was.

"The teachers approached me because they kind of noticed I was focused," Young said. "One day, my English teacher Mr. Tinsen noticed I was reading a book, so he gave me some more books."

He said in his past experiences, teachers usually only approached him when something was wrong.

"I like to read and I like learning; it was just that school was something I was never into," until he decided to get serious and until he went to Dewey, he said. At the same time, he had inwardly determined that he was going to succeed. And he did.

Oakland Unified has been looking at ways to turn out more kids like Smith and Young - to help kids overcome obstacles of poverty and family turmoil and graduate from high school with promises of jobs or higher education. OUSD wants to stem its high drop out rate of 37 percent - and 46 percent among low-income African American boys - and do a better job engaging high school students in learning.

The experiences of Smith and Young show, according to Tate, what kids can achieve when teachers and adult mentors give them individual attention and show genuine interest in their success.

Through its African American Male Achievement Initiative, through restorative justice programs and converting some campuses to Full Service Community Schools, OUSD is working towards its goals.

Chris Chatmon, director of the initiative, said among the most effective pieces in the program is Manhood Development Classes, in which students are paired with adults who become their guides and mentors.

"It is amazing what we have been able to achieve," Chatmon said of the program that provides kids with individual attention and coaching. "We saw an impact on attendance rates and a decrease in incidences of discipline. And then we saw improvement in grade point averages."

That individual care, added with the practices of the restorative justice program that stresses repairing harm done rather than kicking kids out when things go wrong, have been turning around the mind set of students and teachers alike at Dewey, Castlemont High School, United for Success Middle School and other campuses where these programs have been tried.

"We're trying to provide a framework to discipline that is an alternative to suspensions so we are not pushing kids out of school into the criminal justice system," David Yusem, director of OUSD's restorative justice program, said.

"If you suspend a kid, they often end up resenting the kids and teachers who suspended them," without ever getting to the point of feeling accountable for whatever went wrong, he said. "A lot of kids get suspended multiple times, over and over again, then they fall behind and they don't feel like part of the school community. They've been alienated and isolated and told they are not welcome," he said. When kids are "pushed out" in this way, they drop out.

Restorative justice, on the other hand, asks kids to be accountable for their actions and repair what harm they've done because they are part of a community that has suffered as a result. It uses conversation rather than isolation as its basic tool.

"When students do something wrong, there is a certain amount of shame associated with it and restorative justice allows students to work through that shame and change," Yusem said. "It is a healing thing. It lets them know there are people at school that care about them, that they are part of a school and a community.

"If they believe they belong there, kids will take more responsibility for their actions because they are not thinking about leaving," he added. "It also increases teacher retention because it improves student teacher relations."

Even though it doesn't have money to formally roll out restorative justice programs at more than seven to 10 campuses, OUSD decided to adopt "a restorative justice framework," said Superintendent Tony Smith and "to reject zero tolerance" as a philosophy and methodology. Zero tolerance strategies involve kicking out offenders through suspensions or expulsions

"Suspensions result in disengagement caused by being pushed out of the classroom repeatedly," said Barb McClung, coordinator of Behavioral Health for OUSD.

On the path to change, however, OUSD discovered it has been operating with some entrenched racial biases in its discipline practices. In data collected and examined by the Urban Strategies Council, it was found that many of OUSD's African American males were swept up onto a kind of school to prison pipeline, fueled by suspensions and missed classroom time. The Urban Strategies data analysis found that African-American boys were six times more likely to get suspended than white boys.

Chatmon said now staff within OUSD are beginning to have "courageous conversations" about race and discipline and changing its ways.

"We are talking about a culture shift and a paradigm shift and that takes time. We are still working on our models and our systems. But we've definitely seen successes," he said.

Some schools this year, notably Bunche Continuation High School and United for Success middle school, were able to eliminate racial disparities in suspensions this year. Others such as Dewey and some classrooms within Castlemont have taken up the mantle of giving kids individual attention, setting high expectations and believing in them to reach them.

Those, along with safe environments, are the ingredients that lead to academic achievement and graduation from high school.

And, as statistics prove, graduation from high school is a youth's best armor against incarceration.

This story is part of Okland Local's 10-part investigative series: Lessening the impact of incarceration in Oakland. The series was conceived and developed by Micky Duxbury, a freelance writer focusing on the effects of incarceration on individuals, families, and communities. Duxbury's reporting was undertaken as part of The California Endowment Health Journalism Fellowships, a program of USC's Annenberg School for Communication & Journalism.