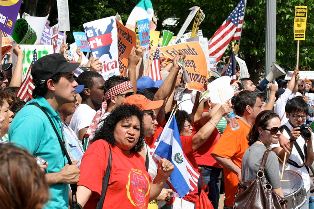 SAN FRANCISCO--Janet Zamudio, a working mother of modest means, says the paid family leave she took soon after her third child, Maya, was born helped her feel "valued as a mother, as well as valued by the state" of California.

"Maya and I would have been in an absolute mess, if I hadn't had the extra time to bond with her and spend quality time with her," said Zamudio, who now works as an advocate with Bananas, Inc., an Oakland-based childcare resource service. Equally importantly, she was able to train her child, now 7, to take a bottle, before she could go to daycare.

Exactly 10 years ago, California became the first state in the nation to pass a Paid Family Leave (PFL) law that allows workers to temporarily leave their jobs to bond with a new child – biological, adopted or foster -- or care for a seriously ill parent, spouse or domestic partner.

"Not having such a law could send people into poverty," asserted Maria Elena Duarazo, executive secretary and treasurer of the Los Angeles County Federation of Labor, AFL-CIO. Organized labor led the way in getting the PFL law passed.

A "Huge Breakthrough" In U.S.

"It was a huge breakthrough," observed Ruth Milkman, professor of sociology at the City University of New York (CUNY) Graduate Center and academic director of the university's Murphy Labor Institute. Milkman was an expert panelist at a July 12 audio news briefing to commemorate the 10th anniversary of the law.

Since the landmark legislation passed in 2002, more than a million people have used the program. Despite that success, though, New Jersey is the only other state that currently has a similar law.

PFL, a part of the State Disability Insurance (SDI) program, provides up to six weeks of partial wage replacement for workers using the program. Workers can draw up to 55 percent of their salary while on paid family leave.

"Fifty-five percent is nothing by international standards," acknowledged Milkman, who pointed out that aside from Papua New Guinea and Swaziland, every country in the world offers their workers PFL.

When the California law first passed, critics called it a "job killer," saying it would hurt businesses. "The truth is, it has been a non-event for business," Milkman observed at the time.

A series of surveys done over the years showed that although most Californians felt the program was a "good idea," few knew about it, she said.

The most recent survey of California's registered voters done as part of a Field Poll last year indicated that only 43 percent of them knew about FPL. And immigrants, the majority of them Latinos, as well as young people, were less likely to know about it, said Nicole Marquez, a lawyer at Equal Rights Advocate.

Advocates agree that more outreach needs to be done for better utilization of the law.

Professionals, managers and others whose employers already provide them with paid time off can draw on PFL, as well. But for these groups, access to wage replacement historically has been as good or better than what the state program now offers.

By contrast, low-wage workers with limited or no benefits stand to gain much more from the state program. In this sense, teleconference panelists agreed that PFL is a potential social leveler that could narrow or perhaps even close the gap in access to paid leave between the "haves" and "have-nots."

Marquez noted that although federal and state laws guarantee job protections to workers, they don't guarantee them pay while on leave. She pointed out, that a worker who pays into SDI is eligible for PFL "regardless of his or her immigration status," including those who are undocumented.

Over the years, the number of men utilizing the program has been steadily increasing, Milkman said.

She noted that the PFL program allows a worker to even travel overseas to care for a seriously ill family member, provided the worker is able to get a letter from a doctor in that country outlining the medical condition of the patient.

There is currently a move afoot to expand California workers' rights to take unpaid leave to care for seriously ill family members, such as siblings, grandparents, grandchildren or parents-in-law.

Introduced by Assemblyman Sandre Swanson, D-Alameda, the bill passed the Assembly in May and is now before the Senate Appropriations Committee. A similar bill proposed by him in 2007, along with Sen. Sheila Kuehl, D-Santa Monica, passed in both chambers but was vetoed by then Gov. Arnold Schwarzenneger.

Zamudio, who is of Mexican descent, said she able to bond more quickly with her third baby, who was born after the state enacted the PFL law, than with her two earlier children. Juggling work and motherhood gave her very little quality time with the two older children, she said, wishing she'd had the same "rewarding experience" with them in infancy as she had with her younger baby.