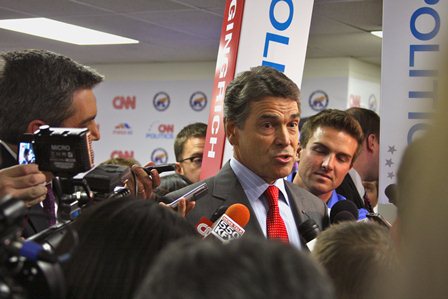 (CNN) -- Former Republican presidential candidate Rick Perry on Tuesday reaffirmed his position that candidates should be forthcoming with their tax documentation, finding himself again at odds with Mitt Romney, his party's presumptive presidential nominee.

Perry first called on Romney to release his tax returns when running for the GOP presidential nomination, and in late January, Romney released his records for 2010 and an estimate of his liability for tax year 2011. He has since said that he does not intend to release additional years, as Democrats - and an increasing number in his own party - have called for.

Perry addressed the issue when asked by a reporter in Austin on Tuesday.

"I'm a big believer that no matter who you are or what office you're running for, you should be as transparent as you can be with your tax returns and other aspects of your life so that people have the appropriate ability to judge your background and what have you," he said.

"I certainly think it is inappropriate for the president of the United States to not keep his college transcript and his law school transcript public," he continued. "He should make those available."

Perry raised the issue in a January Republican presidential debate in South Carolina, saying he thought disclosure of tax returns is a "fair thing" to request.

"Mitt, we need for you to release your income tax so the people of this country can see how you made your money," he said. "Listen, here's the real issue for us: as Republicans, we cannot fire our nominee in September. We need to know now. So I hope you'll put your tax records out there this week so the people of South Carolina can take a look and decide if, you know, we've got a flawed candidate or not."

Romney responded at that debate that he "hadn't planned on releasing tax records" but was "not opposed to doing that" later, "in April or tax season" should he become the nominee.

"I looked at what has been done in campaigns in the past with Senator McCain and President George W. Bush and others," he said. "They have tended to release tax records in April or tax season."

He characterized the financial paperwork all presidential candidates file as "a pretty full disclosure."

He released the 2010 document and 2011 estimate several days later.

Several Republicans have recently called on Romney to be more transparent or said they would be more transparent if in his position, including former Mississippi Gov. Haley Barbour, editor of The Weekly Standard Bill Kristol, the conservative writer George Will, and Matthew Dowd, a former speechwriter for President George W. Bush.

On Tuesday, Romney said in an interview that Democrats would use the records to "distort" him.

CNN's Ashley Killough and Dana Davidsen contributed to this report.