ACLU Sues Over Reading on Behalf of Students 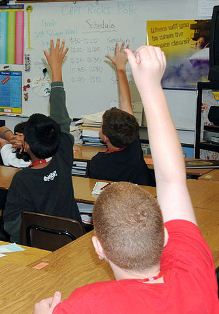 HIGHLAND PARK, Mich. (AP) -- Michigan's governor, education chief and the emergency manager for the financially troubled Highland Park school district were named in a civil lawsuit Thursday that claims students in the small, urban district near Detroit have been denied proper reading skills.

The suit was filed in Wayne County Circuit Court by the American Civil Liberties Union of Michigan on behalf of more than 950 students. The lawsuit seeks education reform.

This is about ``a right of children to read,'' ACLU Michigan Executive Director Kary Moss said at a news conference. ``We want ... the interests of these children to be front and center on any state or district reform.''

Voicemail and email messages were left Thursday afternoon seeking comment from Gov. Rick Snyder's office, state Superintendent of Public Instruction Michael Flanagan and Joyce Parker, who was appointed by Snyder in May to oversee the district's finances.

Public schools in Highland Park are among the lowest-performing on standardized tests in the state.

Financially, Highland Park is one of the poorest in the state. Its budget deficit has risen from $6.6 million to more than $11 million and the state has advanced the district several state aid payments to meet teacher payroll. Many classrooms lack books and other supplies.

Parker wants to turn the district over to private operators, who would run the schools as part of a charter system beginning this fall.