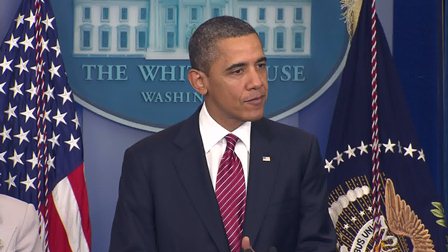 "We declined a few weeks ago and [the] NAACP was pleased [Vice President Joe Biden] was able to attend," a campaign official told CNN.

However, the president did make a brief appearance in a pre-taped video that ran before the vice president appeared.

"If you keep standing with me...I know we can arrive there together," the president said after delivering a few lines from his typical stump speech on helping middle class Americans.

While the president's schedule appeared to be wide open for Thursday--raising questions as to why his campaign cited "scheduling conflicts"--CNN confirmed Thursday morning that Obama and his wife, Michelle, are sitting down for an interview with CBS News.

The president also holds his daily briefing with senior aides and advisers on Thursday.

Hilary Shelton, the NAACP Washington Bureau director and a senior vice president in the organization, said the White House never confirmed a visit.

"They were trying to work out something," Shelton said. As to why Obama could not attend, he added, "Something could not be moved. Something was crucial. And unfortunately, they couldn't move it in a way they could get him here this week."

Obama addressed the convention in 2009 and last year, first lady Michelle Obama spoke to the group.

The White House and Obama's re-election campaign have been hit with questions on the matter especially after presumptive Republican nominee Mitt Romney addressed the group Wednesday.

The former Massachusetts governor was booed during his remarks when he vowed to repeal the Affordable Care Act, Obama's signature health care law.

Biden is scheduled to deliver the conference's keynote address Thursday at the annual convention in Houston, Texas.

Thursday is the final day of the five-day conference.