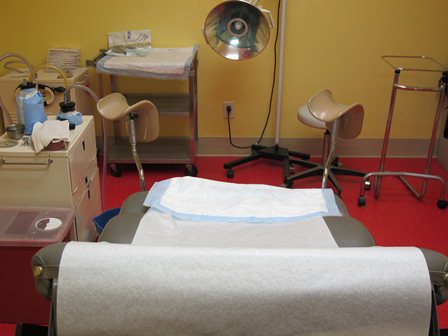 JACKSON, Mississippi (CNN) -- A federal judge will decide Wednesday whether Mississippi's only abortion clinic can continue to stay open under a temporary order or whether it should permanently shut its doors under a new state law.

The law, which took effect July 1, requires all abortion providers in Mississippi to be certified obstetrician/gynecologists with privileges at local hospitals. Doctors at Jackson Women's Health Organization, the only abortion provider in the state, travel in from other states, and only one of its doctors is authorized to practice at a nearby hospital.

Supporters of the new law say it is intended to protect women from unscrupulous practitioners, but others say it's just another step to outlaw abortions in the state. Even Republican Gov. Phil Bryant called it "the first step in a movement, I believe, to do what we campaigned on: to say that we're going to try to end abortion in Mississippi."

Since the law went into effect, the Jackson Women's Health Organization has remained open under a federal judge's temporary order blocking enforcement of the law until Wednesday's hearing. The clinic is trying to comply with the law, according to owner Diane Derzis, but it has been hampered by red tape and the cumbersome application process to get hospital privileges.

That forced the clinic to seek a permanent injunction allowing it to stay open while it fights the law, which Derzis and other opponents say violates Roe v. Wade, the 1973 Supreme Court decision that struck down many state laws that restricted abortions.

On Wednesday, the federal judge will decide whether the state of Mississippi can begin a 60- to 90-day administrative process to begin closing the clinic for noncompliance with the new state law. The clinic, which has been in operation for eight years, says this would cause it irreparable harm and could result in its permanent closure. Its officials also fear fines and jail time if they choose to stay open during any appeals process, which is why they are looking for relief in federal court.

"We've been able to be with women at a time in their lives where they are in crisis, when they need to have something done and need that support," Derzis said. "That's why it has to be available. It has to be."

Despite some past minor citations, the Jackson Women's Health Organization has a very good record with the Mississippi Department of Health, an official there told CNN.

Mississippi is one of the toughest states for the abortion-rights movement. Its laws require a 24-hour waiting period, as well as parental consent if the patient seeking an abortion is a minor. Seven other states require abortion providers to have hospital privileges, but no other state requires that an abortion provider be an OB/GYN, according to the Guttmacher Institute in Washington, a sexual and reproductive health organization.

"All of that is wrapped in that cloak of conservative religion," said W. Martin Wiseman, director of the Stennis Institute of Government at Mississippi State University.

"When you are in this state, you cannot separate an issue from religion. ... The normal rationale used in other states doesn't fly here. You'll find very few legislators -- regardless of whether they are white, black, Democrat or Republican -- who will say 'I'm pro-abortion,' " Wiseman said.

Mississippi state Rep. Sam Mims, a Republican who sponsored the legislation, said the law is intended to protect the health and safety of women.

"I think the intent is to make sure that women who are receiving these abortions are receiving abortions by a professional physician who is certified," he said. "If something goes wrong -- which it might, we hope it doesn't, but it could -- that that physician could follow the patient to a local hospital. That's the intent. And what happens afterwards, we'll have to see what happens."

Bryant signed the bill into law in April after the Republican-dominated legislature overwhelmingly passed it. Bryant said he signed the bill to support women's health, but he also says Roe v. Wade was wrongly decided and should be overturned. He has since filed a "friend of the court" brief in the case against the Jackson clinic.

Derzis believes that the real intent of the newly elected Republican majority was to end abortion in the state, not to improve women's health care.

"I love that it's white old men making those statements," she said. "This is not about safety. This is about politics, and politics do not need to be in our uterus."