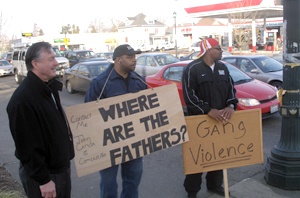 WICHITA, Kan. (AP) -- Gangs in Wichita are changing the way they operate, occasionally collaborating, creating challenges for officers trying to investigate crimes and diffuse tensions between rivals, according to Wichita police.

Members of rival gangs are sometimes joining forces, creating what police call hybrid gangs. And groups that police thought were allies are fighting each other, The Wichita Eagle reported (http://bit.ly/LBZQLm ).

In the past, gang members would be severely punished if they associated with members of rival gangs, said Lt. Scott Heimerman, head of the Wichita Police Department's gang and felony assault unit.

``It's very strange,'' Heimerman said of the new gang affiliations.

The hybrid gangs usually form to accomplish a specific goal, whether it's a crime or just going to the movies together. Then they disband, said Detective Chad Beard.

Keeping up with the changing alliances is a challenge but it is important to help keep peace in the city, Heimerman said.

More than once recently, gang leaders have assumed a violent act was the work of a rival gang but later learned it was committed by a subset within their own group.

``You have to sit down (with them) and say, `Don't start a gang war. This was some of your own people that did this,''' Heimerman said.

Heimerman considers hybrid gangs a natural evolution of the social structure and said police have to keep up.

``Just as the gangs are evolving, we have to learn and do the same,'' he said. ``If we're not on the forefront, and paying attention to these changes, we end up back with what we had in the late 1980s or early '90s.''

In those decades, the city experienced an explosion of drive-by shootings _ more than 300 a year at one point in the 1990s _ and homicide totals more than double those recorded in recent years.

``We were way behind the curve,'' Heimerman said. ``We didn't pay enough attention to it.''

David Gilkey, a gang prevention specialist with the Urban League of Kansas, said hybrid gangs might be the result of gang members' social connections, such as going to school together or living on the same street.

Hybrid gangs also are more likely in smaller cities like Wichita than in big gang areas such as New York, Chicago and Los Angeles, he said, because gangs control entire neighborhoods in bigger cities, while in Wichita the boundaries are more flexible.

Wichita has an estimated 3,000 gang members, though that number includes fringe members and those in jail, police said.