The Next Wave of Asian America on College Campuses 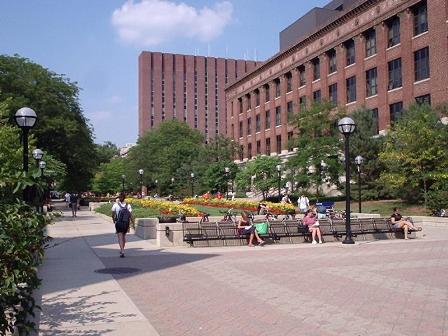 When Twitter accounts "Purdue Asians" and "Kim Jong Il" (with the handles @OrientalSwag and @Purdue_Asian, respectively) started tweeting things like "I sreep for entire crass & stir get better grades than you! :D" Asian American students at Purdue found another reason to sign a petition being circulated for the establishment of an Asian/Asian American cultural center on campus.

"What affected me the most about the account was it was branded Purdue. I chose to go to this school and to see my culture being mocked hurt," said Tamara Dizon, a sophomore who has been spearheading efforts to create an Asian/Asian American cultural center at her school.

"I think this is all the more reason to have a cultural center at Purdue, to better educate everyone of the different cultures and how some statements can be hurtful," Dizon added.

From large public institutions like Purdue University and the University of North Carolina at Charlotte to small private colleges like Williams College and Princeton University, students across the country are advocating for an increase in Asian American-related programs, such as academic departments, course offerings, and cultural centers, at their schools.

For those Asian American students at Purdue, the cultural center would serve as a valuable resource and unifying space on campus, especially in light of the racist tweeting incident and others affecting the Asian American community, says Victoria Loong, a sophomore who has been working alongside Dizon.

"In response [to the racist tweets] people have said to 'just ignore it — these people thrive off attention and we're giving it to them,' which I found to be utter nonsense because of the way people react to racism with other minorities," said Loong.

She added, "I'd say with a cultural center we would have the resources to start a[n] . . . awareness campaign to have fought it in one unified group. Without a location for us all to convene we are all separated despite our numbers."

"Asian American Studies" (AAS) as a distinct field of academic study did not emerge until 1969, when the Third World Liberation Front was formed by students of color at San Francisco State University (SFSU) and UC Berkeley to demand the formation of a Third World College.

Although this movement lead to the establishment of Ethnic Studies as a college at SFSU and a department at UC Berkeley, it wasn't until the 1990s that university departments dedicated to Asian American Studies specifically were created.

In 1995, advocates for an AAS minor program at Northwestern University organized a student hunger strike that lasted 23 days.

The strike inspired students at other universities to demand AAS programs and courses, and in that same year, the University of California, Santa Barbara began offering the country's first Bachelor of Arts degree in AAS.

"Programs like this are intellectually, socially, and institutionally important … Institutionally because it can help open up historically white institutions and transform them into genuinely diverse institutions," said Professor Ji-Yeon Yuh, director of Northwestern's AAS department.

Currently, the AAS program at Northwestern is "thriving," says Yuh. She has taught courses on Asian American women and Japanese American internment, among other topics, at the university.

According to the Association for Asian American Studies, there are now about 32 autonomous AAS programs at universities across the country. Programs in California and New York make up the majority of the list. There are also 20 colleges that offer the program within other departments and 18 that feature AAS courses (but no AAS department).

Despite the progress made during the early 1990s in establishing AAS departments, many universities still lack or are in the process of implementing such programs.

The struggle to establish an AAS minor at Tufts University in Boston has lasted over 20 years, says Lorrayne Shen. Shen, a member of Tufts' Asian American Association (AAA), helped organize a teach-in to raise awareness about the program.

The AAS minor was recently voted into the Tufts curriculum after students organized to be able to get a student working group that advised the faculty working group responsible for creating the program, says Shen.

"On our own campus, Asian Americans are the largest minority but we have only a couple of classes that speak to this experience," said Shen.

She added, "Asian American Studies is extremely important … [it] is not just about social identity politics, but about power structures and a fuller understanding of American history and society."