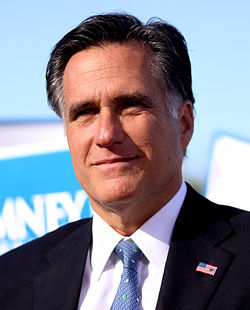 Team Obama heavily pushed the article that appeared in the August issue of Vanity Fair, calling into question the lengths Romney went to in managing his finances and asking if the former private equity CEO was in violation of tax evasion.

"Mitt Romney's economic philosophy has always put maximizing his profits above anything else," Ben LaBolt, the campaign's national press secretary, said in a statement. "Even if it means refusing to bet on America and its workers."

Romney's team was quick to fire back saying, "President Obama's attacks on Mitt Romney have been proven false time and again."

Romney's foreign investments have long been a matter of record, but the article investigates how the former Massachusetts governor carefully managed a large chunk of his finances.

"Romney, like the superhero who whirls and backflips unscathed through a web of laser beams while everyone else gets zapped, is certainly a remarkable financial acrobat," the report states. "But careful analysis of his financial and business affairs also reveals a man who, like some other Wall Street titans, seems comfortable striding into some fuzzy gray zones."

Those fuzzy gray zones, the report says, includes meticulously managed accounts in the Cayman Islands, investments in Bermuda and a Swiss Bank account - all considered tax havens where people can pay little or no taxes on certain sources of income.

According to Romney's tax returns, which he released in January after heavy pressure from critics, the millionaire earned $42.7 million in 2010 and 2011 and paid an effective tax rate of 14.5%, well below the 35% tax rate for high-income earners.

His low rate is attributed to the fact that his income almost entirely came from capital gains and dividends from an extensive portfolio of investments, which are typically taxed at just 15%. He also had considerable itemized deductions, which lowered his overall tax liability.

Romney's campaign has repeatedly maintained that he has paid his taxes in full and met all requirements.

But opponents use his wealth as a way to paint the candidate as out of touch with most of the country. Fellow Republican and former House Speaker Newt Gingrich launched the attack line against Romney ahead of the Florida Republican primary in January.

"I think you have to live in worlds of Swiss bank accounts and Cayman Island accounts and automatic $20-million-a-year income with no work to have some fantasy this far from reality," Gingrich said at a Miami forum hosted by Univision.

The Obama campaign used Gingrich's quote in a web video attacking Romney in early May and produced a television ad, as well, targeting Romney for the Swiss account. The ads were all a part of an ongoing, expansive offense against Romney over his corporate career at Bain Capital, the private equity firm he co-founded in 1984 and left in 1999.

The Vanity Fair article states that Romney still makes millions from the firm.

"The firm today has at least 138 funds organized in the Cayman Islands, and Romney himself has personal interests in at least 12, worth as much as $30 million, hidden behind controversial confidentiality disclaimers," the article said.

Obama's campaign, as well as a super PAC supportive of the president, pushed the storyline for much of Tuesday, arguing Romney should release further tax returns than the two-year's worth he has already put out.

"If he has nothing to hide, why doesn't he just release his tax returns?" LaBolt said.

Responding to the attacks over the Vanity Fair report, Romney's campaign said the president was attempting to "distract from his abysmal record."

"President Obama's attacks on Mitt Romney have been proven false time and again," said Romney spokeswoman Amanda Henneberg. "As job growth slows, manufacturing activity stalls, and our economy continues to sputter, President Obama knows he can't make a legitimate argument for another term in office, so instead he is trying to tear down his opponent. This is just the latest example of President Obama and his political machine saying or doing anything to distract from his abysmal record over the last four years."

Not letting that stand, Obama's campaign said the Romney response failed to address "a single charge in the story."

"Non-answers have become par for the course for Romney's campaign, especially as it relates to his extremely opaque-and controversial-personal finances, including his use of offshore tax havens. All of which begs the question: just what is Mitt Romney hiding?" the campaign said in a statement.