Video: Lawsuit Filed in Police Shooting Death of Ailing Veteran at His Home

"Today, Kenneth Chamberlain Jr. filed a federal civil rights lawsuit against the city of White Plains and the officers who we allege were responsible for his father's death," said the family's lawyer, Randolph McLaughlin. "While one officer fired the fatal shot, the other officers were all involved in the siege at Mr. Chamberlain's door and the brutality when they forced the door down and entered his apartment."

Kenneth Chamberlain Sr., 68, was fatally shot early November 19 by police who had responded to a medical alert. Chamberlain, who was unarmed, apparently had accidentally set off the alert pendant that he wore around his neck.

When police arrived, he refused to open the door. In a written report, police describe Chamberlain as an irrational man who stuck an 8-inch butcher knife through a crack in the door and jammed it shut with a chair when officers tried to enter.

Police forced open the door and used a Taser, bean-bag bullets and finally live bullets, the report says. Chamberlain approached an officer "with the butcher knife raised," it says. 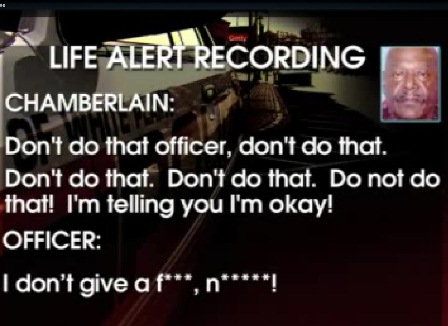 After the incident, reports surfaced alleging an officer shouted racial slurs as police entered the home.

Portions of the confrontation were recorded, but there was no video of the shooting.

The family is alleging wrongful death and negligence on the part of the city of White Plains, the White Plains Housing Authority and eight officers with the police department.

"We believe that there is a pattern of police misconduct which is a result of poor training and conscious decision by the (police) department," said Mayo Barlett, another Chamberlain family attorney.

After an investigation into the circumstances surrounding Chamberlain's death, a Westchester grand jury in May did not indict Anthony Carelli, the officer who fired the fatal shot.