Voter Suppression, Not 'Fast and Furious,' Behind Attack on Holder 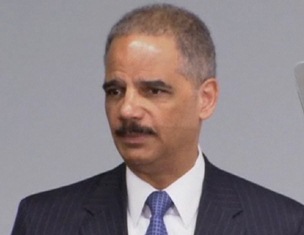 On Thursday the House voted to hold Attorney General Holder in contempt for failing to disclose internal Justice Department documents tied to a House committee investigation into the sting operation on gun running from the United States into Mexico. But according to Congresswoman Moore, the move is a politically motivated response to Holder's office's legal challenges to voter suppression laws.

"I totally agree with Nancy Pelosi," Moore, a Democrat, said, adding that Holder is "being pilloried" to discredit the Department of Justice as it evaluates laws that could change the electoral map in November's election.

Holder's office has the authority to reject changes to voting laws in some states under the Section 5 of the Voting Rights Act, which protects racial and language minority voters against discriminatory effect. Voter ID laws in South Carolina and Texas, for example, were not approved by DOJ. Those states are now going to court to overturn DOJ's decisions.

The status of voter ID laws in several other states is less clear. Virginia, among the states deemed crucial to the November presidential race, also passed a voter ID law but the state, which is also subject to Section 5, has yet to submit its changes to DOJ for approval. In all, with Rhode Island being the exception, each of the 10 states that have passed more restrictive voter ID laws since 2010 had Republican-led legislatures at the time of enactment. Government-issued photo IDs will be required to vote this year in Kentucky and Tennessee as a result.

"Here's a quick snapshot of the numbers and types of people in my state who will be disenfranchised by these voter suppression laws," Moore said. "Remarkably, 23 percent of all elderly Wisconsinites over the age of 65 do not have either a driver's license or a photo ID card issued by the state of Wisconsin."

Moore spoke during a teleconference with ethnic media organized by New America Media and the Brennan Center for Justice. Minnesota Rep. Keith Ellison, also a Democrat and one of the two Muslim legislators now serving in Congress, was also on the call.

Had Wisconsin's proposed voting laws been in effect in 2008, explained Moore, the state's 10 electoral votes won by President Obama might have gone to the Republican nominee, Sen. John McCain.

Wisconsin's voter ID laws are currently tied up in court. There were reports, however, of voters being asked to show IDs at the polls during the state's contentious recall vote that its governor, Scott Walker, survived earlier in June. Some see a possible harbinger of what's to come should more restrictive voting ID measures be put into effect in November.

"We're in a struggle over power," Minnesota Rep. Keith Ellison said, arguing that the efforts to impose restrictions on the vote are driven by opponents of President Obama's election. "If we ever thought that was the end of the story, we were wrong."

In his state, voting ID provisions were passed into law after Republicans took control of the legislature, but were vetoed by the governor. Proponents were successful in getting them placed on a ballot initiative that will be decided by Minnesota voters during the November election.

During the call, he pointed to a poll conducted last year that found "about 78 percent of Minnesotans thought requiring voter ID would be a good thing." More recent polling, he said, has seen that number decline to 52 percent as a coalition of anti-restrictive voting ID activists have ramped up education and outreach activities to the public.

"The Democratic caucus is extremely concerned about [these] voter suppression efforts," he said, adding it will look to the DOJ as well as state election officials to make sure laws are vetted and implemented fairly. But while politics may be paramount, at the core of the issue, he argued, is the "vast lack of uniformity in how Americans get to vote."

Moore, meanwhile, took aim at proponents of the law, who argue "certain types of voters" should be subjected to more stringent requirements to protect against voter fraud.

Behind their attempts to increase voter ID requirements, she said, is the idea that "these people, who are too disorganized and are not middle class enough to have their birth certificate, or too poor to send off to another state for their birth certificate; perhaps people who are homeless and don't necessarily have an address, shouldn't be able to vote."

The right to vote, Moore said, shouldn't be exclusionary and, in fact, as enumerated by constitutional amendments, "is the cornerstone of our democracy."