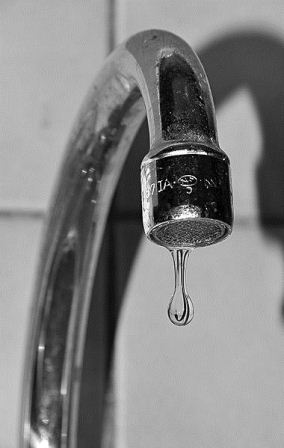 Editor's note: The following article is and excerpt from Part 4 of "Pollution, Poverty, People of Color," by Environmental Health News. Click here to read full versions of the articles in this series.

EAST OROSI, Calif.–Jessica Sanchez sits on the edge of her seat in her mother's kitchen, hands resting on her bulging belly. Eight months pregnant, she's excited about the imminent birth of her son. But she's scared too.

A few feet away, her mother, Bertha Dias, scrubs potatoes with water she bought from a vending machine. She won't use the tap water because it's contaminated with nitrates.

Every day, Dias, 43, heads to the fields to pick lemons or oranges, lugging a ladder so she can reach the treetops. She often skips lunch to save money for the $17.50 she needs each week to fill jugs with vending-machine water.

Four years ago, the family learned that it had nitrates in its drinking water, which Sanchez drank as a little girl. She started speaking out about her town's toxic water when she discovered that nitrates can cause "blue baby syndrome," a potentially fatal blood disorder that cuts off an infant's oxygen supply.

Sanchez, 18, who graduated from high school last year, lives in East Orosi, a square parcel carved out of 160 acres of land in Tulare County surrounded by orchards in the shadow of the snow-capped Sierra Nevada. Fewer than 500 people, nearly all Latino, live in this long-neglected town with no sidewalks, street lights, parks or playgrounds. More than half live below the poverty level.

The struggle to find clean drinking water has become a way of life for the residents of East Orosi. But they're not alone. Like a growing number of California's poor people, they're paying for water that's not fit to drink.â€¨â€¨One in 10 Californians  in two major agricultural regions pays high rates for well water that's laced with nitrates, pesticides and other pollutants. Most are low-income Latinos; many speak only Spanish.

Public health researcher Carolina Balazs suspected that nitrate-tainted water was an environmental justice problem, so she examined the contamination along with income and ethnicity in small public water systems in eight counties of the San Joaquin Valley.

She found that nearly 5,200 people had drinking water that exceeded federal nitrate standards, and half were Latino. Another 449,000, more than 40 percent Latino, had medium levels that ranged from just under the limit to half the maximum allowed.

"It was in the small systems with highly Latino populations where the nitrate levels were the highest," said Balazs, lead author of research at the University of California, Berkeley, that was published in the journal Environmental Health Perspectives last September.

California's $37.5 billion farming industry has led the nation in food production for more than 50 years. The state has known for decades that nitrate contamination has been a cost of that productivity. But now, state officials know the primary sources of contamination, just how extensive it is and who's shouldering the burden.

Nitrates jeopardize the drinking water of 254,000 people out of the 2.6 million who rely on ground water in  the Central Valley's Tulare Lake Basin and Salinas Valley, according to a University of California, Davis study commissioned by the state Legislature and released in March. Agriculture accounts for 96 percent of that contamination.

The number of people exposed will likely grow. It can take decades for nitrates to travel from the soil surface to ground water.

"We know we can't stop all sources tomorrow and that there will be a time lag until we get the situation under control," said Thomas Harter, a ground water hydrologist who led the UC Davis study. "We will definitely see an increase in nitrate contamination over the next 10 or 20 years."

Jessica Sanchez fills a glass from the tap and holds it up to the light. The water appears cloudy, almost opaque, as particles swirl around. After a few minutes, the particles settle, and the water looks normal.

That's precisely the trouble, water activists say. You can't see or taste nitrates. "If you have sulfur or manganese in your water, it looks brown and gross and you quit drinking it before it poisons you," said Jennifer Clary, a policy analyst with Clean Water Action. "But with nitrates, you don't."

Nitrates become toxic when bacteria in saliva and the gut convert them to nitrites, which in turn convert hemoglobin into methemoglobin, which can't deliver oxygen to tissues. Babies are vulnerable in part because their immature stomachs harbor abundant nitrite-producing bacteria.

Health experts worry that people don't know about the risks and that doctors may not consider nitrate exposure in their diagnoses.â€¨â€¨Mark Miller, MD, used to treat patients in Chico, in the northern Central Valley, where some wells had nitrate levels 10 to 15 times higher than the federal standard.

"But there was no awareness among clinicians and no effort from public health authorities to check wells and inform people about this hazard," said Miller, director of the state's Children's Environmental Health Program and head of the University of California, San Francisco Pediatric Environmental Health Specialty Unit.

The majority of the at-risk residents get their water from public systems, many of which rely on a single well. East Orosi has two public wells and both regularly have unsafe nitrate levels. Managers of the town's volunteer water board – the East Orosi Community Services District – did not respond to repeated requests for comment.

Water Rates for the Rich

For years, Dias, Sanchez's mother, had to buy bottled water for her kids to take to school, on top of the water she bought for her home.

Dias makes $7.50 an hour picking fruit, and pays $60 a month for her tap water and up to $75 a month to fill jugs with water from a vending machine. That's nearly five times more than the average San Franciscan, who earns about $45,000 a year and pays just $28 a month for some of the nation's best tap water, drawn from Sierra Nevada snowmelt.

"If you looked at people's water rates, you'd think we were rich," said Susana De Anda, co-founder of the Visalia-based nonprofit Community Water Center. "The reality is that we're making sacrifices just to have safe drinking water in the home."