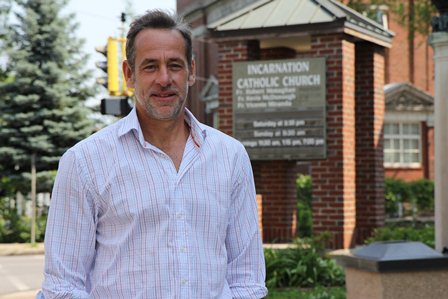 MINNEAPOLIS (CNN) -- Jim Smith is a former Roman Catholic priest who left his post with the church 10 years ago. He's an ex-priest for several reasons, he says, but one of his main concerns was the church's stance against same-sex marriage and other LGBT issues.

But Smith remains a Catholic - though he says being a Catholic who actively campaigns for legalized same-sex marriages can be difficult these days.

"I'd much rather this wasn't happening," Smith says of the division that the issue has created among Minnesota Catholics. "But it does provide some real opportunities because it challenges us to talk to each other, Catholics talking to other Catholics."

Minnesota has become the newest epicenter in the same-sex marriage fight. This November, voters will decide whether they want an amendment added to the state's constitution that would ban marriage between members of the same sex.

Smith will be voting "no." And he has helped spearhead efforts in the state to persuade other Catholics to do the same.

A group he helped form, Catholics for Marriage Equality-Minnesota, aims "to encourage Catholics to consider the profound sacredness of same-gender relationships and to defeat this marriage amendment," Smith says.

But a recent poll by the Public Religion Research Institute (PRRI) suggests 59% of American Catholics support rights allowing gay and lesbian couples to legally marry. One reason behind that statistic - says PRRI CEO Robert P. Jones - is because U.S. Catholics "overwhelmingly reject the idea that sexual orientation can be changed." A PRRI poll bears that out -- with 69% of Catholics nationwide saying a person's sexual orientation cannot be changed.

In the Midwest alone, Catholics are evenly divided on the issue of same-sex marriage --- with 46% in favor, 47% against.

Like Jim Smith, Michelle LaFrance is a Catholic who has also taken the bold step against the church in support of marriage equality.

"I remember thinking 'wow, maybe I shouldn't [remain a Catholic],' " LaFrance said. Ultimately they've remained with the Catholic faith, citing its many positive aspects including going to church. It's an important weekly ritual for LaFrance, her husband and their three kids.

"The Catholic Church, despite the media [attention] it typically gets, does a lot of great things, a lot of great social justice," LaFrance said. She noted the church "feeds the poor, houses the homeless, takes care of the abused."

The LaFrance family belongs to the Church of St. Margaret Mary in the Minneapolis suburb of Golden Valley, a congregation which LaFrance describes as fairly progressive. She says the majority of her fellow parishioners agree with her stance on same-sex marriage.

But when LaFrance hears the archdiocese telling people how they should think about it, she can't help but sometimes feel like less of a Catholic.

"I don't think anybody - whatever their religious denomination - whole-heartedly follows every single rule down to the letter."

On the other side of the debate stands Dave Deavel.

Although he agrees with LaFrance to an extent, he says he believes there are certain pillars of the Catholic faith that people should follow. One of those is the church stance that marriage should remain between one man and one woman.

"The whole point of what the church teaches is to form people's consciences," Deavel says.

For Deavel, his wife and their five children, attending church is so important they strive to go multiple times a week.

He's active with Minnesota for Marriage, which supports of the same-sex-marriage ban, and has written various blog posts on the topic for the Minnesota Catholic Conference.

"But they certainly don't represent what the church teaches," he said. "Is it a spiritual problem? I think yes."

The Minnesota Catholic Conference, along with the Archdiocese of St. Paul and Minneapolis, declined CNN's request for an interview. In a written statement, they say groups such as Catholics for Marriage Equality "do not have any right to call their organizations 'Catholic.' "

In the past, the conference has issued statements accusing Catholics for Marriage Equality of trying "to confuse Catholics and the public about authentic church teaching" on marriage.

"Catholics for Marriage Equality MN attempts to convince Catholics that they can be in good standing with the church and oppose church teaching about human sexuality and marriage, which centers on the complementarity of the sexes and the mutual self-gift of loving spouses in marital union."

Does church doctrine make it impossible for same-sex marriage supporters to be true Catholics?

"There is no judgment intended about an individual's 'Catholicity' or 'Catholic-ness,' " says MCC spokeswoman Jessica Zittlow.

Minnesota's November ballot proposal to ban same-sex marriage isn't an amendment against LGBT individuals, say the MCC and the St. Paul and Minneapolis Archdiocese. Instead, they say it should strictly be viewed as an amendment supporting traditional marriage.

For ex-priest Jim Smith, grappling with the issue has been difficult - a personal struggle that extends to the heart of his faith.

The inner conflict between what Smith believes is right and his love for the church has pushed him to consider leaving the Catholic religion altogether.