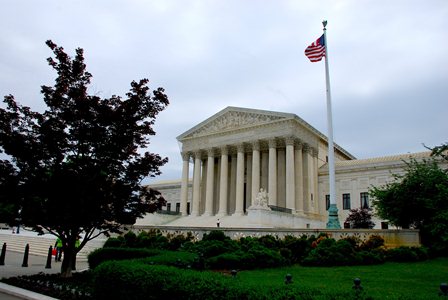 In an 8-0 vote, justices concluded the Federal Communications Commission cannot enforce its current policies against "fleeting" expletives and nudity on over-the-air programs, both live and scripted. The agency had levied hefty fines on all four major broadcasters beginning nearly a decade ago.

"The commission failed to give Fox or ABC fair notice prior to the broadcasts in question that fleeting expletives and momentary nudity could be found actionably indecent," Justice Anthony Kennedy wrote for the majority.

The Justice Department had filed an appeal, and helpfully provided the justices with a DVD of a 2003 episode of the now-canceled "NYPD Blue" on ABC in which a naked woman was shown. The content of that program is central to the current legal dispute. ABC, CBS, NBC and Fox are all parties in the case.

A federal appeals court last year for a second time struck down the government policies, concluding they were vague and inconsistently applied. Pending sanctions against the broadcasters were dismissed.

Controversial words and images have been aired at times in scripted and unscripted shows on all the major over-the-air networks in the past eight years, dating back to when the FCC began considering a stronger, no-tolerance policy.

The policy became known as the Golden Globes Rule, for singer Bono's 2003 acceptance speech at the live awards show on NBC, where he uttered the phrase "really, really, f---ing brilliant."

The commission specifically cited celebrities Cher and Nicole Richie for potty-mouth language in the 2002 and 2003 Billboard Music Awards, which aired live on Fox. Richie, in an apparent scripted moment said, "Have you ever tried to get cow s--t out of a Prada purse? It's not so f---ing simple."