Five Reasons Gay Marriage Losing Streak May Be Over 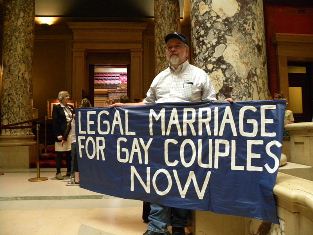 They've won in blue states and red ones, among the most heavily religious areas and among the least-churched. North Carolina punctuated the winning streak just last month by comfortably approving a constitutional amendment to ban same-sex unions.

Gay marriage supporters are optimistic that they can end their losing ways this year, with four states voting on the issue in November. They're particularly encouraged by the prospects in Washington and Maine. Meanwhile opponents have taken steps to maintain their unflawed record and believe their side will be motivated to hold the status quo.

Here are five reasons why same-sex marriage proponents have a decent shot at success in 2012:

WASHINGTON: Officials certified a gay marriage referendum on Tuesday, meaning Washingtonians will decide the issue this fall. Voters upheld an ``everything but marriage'' law in a similar referendum vote three years ago, approving it by a 53-47 margin. That was the first time that a state's voters had agreed to extend relationship rights to same-sex couples. It expanded benefits including the right to use sick leave to care for a domestic partner, and rights related to adoption, child custody and child support. Lawmakers comfortably approved gay marriage earlier this year as political leaders such as Gov. Chris Gregoire talked about how their views on the issue had changed. However gay marriage opponents are not conceding anything yet. National groups have promised time and money to fight Washington's new same-sex marriage law via the referendum, including the Washington, D.C.-based National Organization for Marriage, which was involved in ballot measures that overturned same-sex marriage in California and Maine.

REPUBLICANS: Six Republican lawmakers in Washington voted in favor of the gay marriage legislation, and a leading GOP candidate for attorney general also declared his support. Republican Rep. Maureen Walsh, who represents conservative territory in eastern Washington anchored by Walla Walla, said she believes opinions on the issue are changing even there. ``My district is far more receptive to it than they've ever been in the past,'' she said.

POLLS: A recent poll conducted by consulting firm Strategies 360 found that 54 percent of likely Washington voters think it should be legal for same-sex couples to get married, though the survey didn't specifically ask them how they'll vote on Referendum 74. Public support nationally has also been increasing steadily, though both sides of the gay marriage issue have indicated caution with opinion polls on this issue, noting that some may say one thing in surveys but vote another way on an emotionally charged issue. And same-sex marriage opponents point to their many victories at the ballot box in previous elections.

MAINE: Maine voters rejected gay marriage three years ago by a 53-47 margin, and activists have been working over the past two years to change voter opinions. They believe there are positive trends, especially since several of the states that have legal same-sex marriage are New England neighbors _ New Hampshire, New York, Massachusetts, Vermont and Connecticut. The Legislature in New Hampshire, now controlled by Republicans, considered repealing that state's gay marriage law this year but ultimately rejected that effort.

OBAMA: President Barack Obama's recent declaration of support for gay marriage was celebrated as a key endorsement among gay rights groups. He remains comparatively popular in Washington, with 53 percent approving of his work and 43 percent disapproving, according to the Strategies 360 poll. Obama's image and statement has been prominently displayed on the website of those trying to sustain the gay marriage law. David Farmer, who is leading efforts to legalize gay marriage in Maine, said Obama's statement galvanized supporters and also echoed the views of people on the fence. ``The way he talked about his evolution is very similar to what we see people talking about when we go to door-to-door,'' Farmer said. But foes of gay marriage in Washington think the president's support could backfire. Joseph Backholm, with Preserve Marriage Washington, has said Obama's endorsement ``will galvanize and energize our folks.''