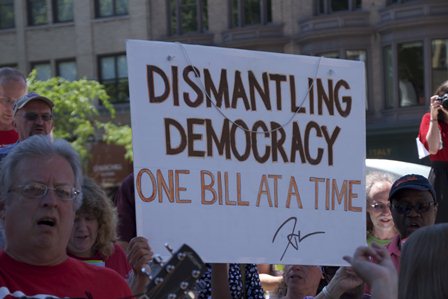 Both Walker and his opponent, Democratic Mayor Tom Barrett of Milwaukee, cast their ballots Tuesday morning in an election expected to hinge on which side does a better job of motivating its supporters to vote.

Final polls indicated a narrowing lead for Walker in a vitriolic campaign that included tens of millions of dollars in funding from outside the state, mostly for the Republican governor.

"We can't spike the ball on the 10-yard line," Walker said Monday night in a Green Bay restaurant, within walking distance of the Packers' famed Lambeau Field. "We've got to take it all the way into the end zone."

The race is a rematch of the 2010 governor's contest won by Walker with more than 52% of the vote.

This time, the stakes are higher.

A victory by the first-term governor could give Republicans a major boost in efforts to make Wisconsin a battleground state in the November presidential election.

President Barack Obama easily won the state in 2008, but Walker's unyielding commitment to fiscal austerity in the face of chaotic protests last year made him the poster child for tea party conservatism.

If Walker loses, he would be only the third governor in U.S. history ousted by a recall election.

Along with the gubernatorial recall, voters also will decide whether Walker's lieutenant governor and four Republican state senators keep their jobs. Just one GOP loss among the four state senators facing recall races would flip control of the chamber back to Democrats, at least until the next election in November.

A former Republican state senator ousted in a Wisconsin recall vote last year told CNN on Tuesday the political wound he suffered was worth it because of the fiscal austerity achieved.

"I lost my job standing for something, and I was standing for the people, fiscal responsibility, and the future of this country and the state and its residents," Dan Kapanke said, adding that "the times dictate tough decisions, and we want our elected officials to do the right thing and worry about the future and not just about the next election."

Walker complains that repeated recall efforts over past years are stalling progress and costing the state needed money.

On Tuesday, Barrett told CNN he agrees that voters are tired of recall politics, but he blamed Walker for creating a divisive political environment that inspired the effort to oust him.

"What Gov. Walker doesn't say is he was the one who, these are his words, dropped the bomb and attempted to divide and conquer. So he set out on a strategy to divide this state. He succeeded in dividing the state," Barrett said, adding that the proper course now is to "get rid of the instigator rather than to allow him to continue because I think this state will remain this bitterly divided if he continues in office."

About $64 million has been spent on the race since November 2011, an analysis from the Center for Public Integrity found. That's a state record, shattering the previous record of $37.4 million spent during the 2010 governor's race.

Walker outraised his opponent by an almost 8-1 ratio, collecting $30.5 million to Barrett's $4 million. Roughly two-thirds of Walker's contributions came from out of state, the Center for Public Integrity reported, while only a quarter of Barrett's funds originated from outside Wisconsin.

Barrett said Tuesday that such outside influence is a change for Wisconsin.

"What's happened is Scott Walker has become the rock star of the far right and has been able to raise literally millions of dollars from out of state contributors," Barrett told CNN.

The recall effort was spurred by a Walker-backed law, signed in March 2011, to limit the collective bargaining rights of state worker unions.

During a bitter fight over the law last year, Democratic legislators left the capital to prevent a quorum, and tens of thousands of protesters converged on the State Capitol building in what became an occupation.

After the law was signed, Democrats immediately began a recall effort that led to Tuesday's vote.

Walker has defended his budget actions as necessary for the fiscal health of his state and described his campaign as one of a strong leader who is making the necessary "tough decisions."

The campaign has been fierce, with campaigners complaining of keyed cars, verbal harassment and a general lack of tolerance for differing opinions.

"We have an example of Hatfields and McCoys going on in this state like we have never seen," said Brian Nemoir, a Milwaukee-based Republican strategist. "People are hyper-engaged, as much in support for their own candidate as in disgust for the opponent."

Handmade signs are nearly as prevalent as official ones. Some locals say they have resorted to lowering their voices in public when discussing the recall to avoid setting off arguments with strangers.

A litany of Republican stars have campaigned for Walker, including fellow governors Chris Christie of New Jersey, Nikki Haley of South Carolina, Bobby Jindal of Louisiana and Bob McDonnell of Virginia, as well as U.S. Sen. Marco Rubio from Florida.

Americans for Prosperity, a conservative advocacy group built around many of the same principles as the tea party, has pumped more than $10 million into Wisconsin backing Walker's policies.

However, his campaign fund-raising has badly trailed the support Walker received. The Progressive Change Campaign Committee announced Saturday it was spending $100,000 in the last five days before the Wisconsin recall vote, bringing its investment to $300,000. 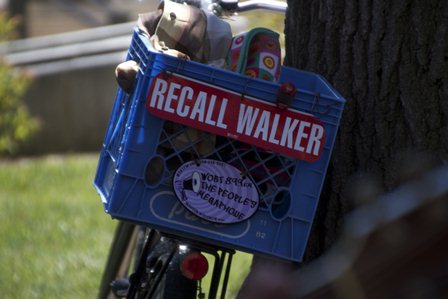 In addition, Obama never came to Wisconsin to campaign for Barrett, which Republicans surmised was because the president believes Barrett will lose.

On Sunday, Barrett said on CNN's "State of the Union" that his campaign never asked Obama to appear on his behalf, adding that "we understand he's got a lot going on."

White House Press Secretary Jay Carney acknowledged the uniqueness of the contest, while also stressing there's no doubt where the president stands.

"The president's made clear all along his opposition to those who would take away workers rights -- to actions that would take away or diminish worker's rights," Carney said. "And he's also made clear his support for Tom Barrett."

With polls indicating most voters already had decided on their choice, the competing campaigns focused efforts on getting people to actually cast their ballots.

"We Are Wisconsin," an umbrella group funded by labor unions and the Democratic Governors Association, said it contacted nearly 750,000 voters over the weekend, with the goal of touching 1.4 million people with phone calls or door knocks by the close of polls Tuesday.

Meanwhile, the state GOP and the Republican National Committee, which are coordinating some of their efforts with the Walker campaign, boasted Monday that they have identified and contacted 4 million voters since January.

While Tuesday's vote will culminate a two-year fight over collective bargaining rights for public employee unions, both parties are casting the debate as a larger referendum on the role of government and policies supported by both parties.

Barrett, however, has continually framed the race as a state contest instead of a national affair.

"I want to make sure that everybody understands this is about Wisconsin values. It's not about Washington, D.C. It's about right here, who is going to control the future of this state," Barrett said Sunday. "Will it be tea party, the national right wing, or is it going to be the people of the state of Wisconsin? And I'm putting my money on the people of the state of Wisconsin."

CNN's Peter Hamby and Greg Botelho contributed to this report.