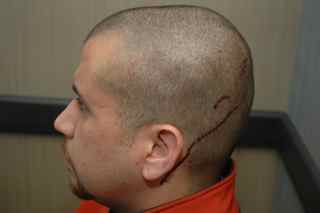 A judge revoked Zimmerman's bond Friday, saying he misled the court about his finances.

Zimmerman, a neighborhood watch volunteer, is accused of shooting unarmed teenager Trayvon Martin in a gated community in Sanford in February. Zimmerman argues he acted in self-defense.

"While out on bond, Mr. Zimmerman has been living in a secure, undisclosed location as there are significant threats against his life," his attorneys said Sunday on the official website for his defense.

"The defense team has coordinated with the Sanford Police Department to ensure Mr. Zimmerman's security when he turns himself in before today's 2:30 p.m. deadline," the website posting said.

Zimmerman is charged with second-degree murder in the case that sparked anger across the country.

Martin's family contends that Zimmerman racially profiled the 17-year-old who was walking home from a convenience store. Martin was black; Zimmerman is white Hispanic. His family has said Zimmerman did not act out of racial bias.

Seminole County Judge Kenneth Lester Jr. ordered Zimmerman back to jail, saying the 28-year-old was not truthful about how much money he had access to when he was freed on bond in April.

Lester's ruling on Friday followed allegations by prosecutors that Zimmerman had $135,000. At the time, his wife told the court under oath that the family was indigent.

Zimmerman's attorneys said they will request a new bond hearing to address the issue. "The defense team hopes that Mr. Zimmerman's voluntary surrender to Sanford police will help demonstrate to the court that he is not a flight risk. Furthermore, the vast majority of the funds in question are in an independently managed trust" which Zimmerman and his attorneys cannot access directly, the statement on his defense website said.

Zimmerman's trial is not "anticipated" to be ready until some time in 2013, the statement said, and the next bond hearing will determine whether he waits "those many months in jail or not."

Zimmerman was charged in April after the case was referred to a state attorney for a review.

The money in question appears to have been donated to Zimmerman through a website he set up to help with a legal defense fund.

Citing recorded jailhouse conversations between Zimmerman and his wife, prosecutors alleged the two spoke in code when discussing the money in a credit union account, according to a court documents filed Friday by State Attorney Angela B. Corey.

In light of that, Lester revoked Zimmerman's bond and ordered he turn himself in no later than Sunday afternoon.

Zimmerman "fully controlled and participated in the transfer of money from the PayPal account to defendant and his wife's credit union accounts," Corey said in court records. "This occurred prior to the time defendant was arguing to the court that he was indigent and his wife had no money."

Mark O'Mara, Zimmerman's attorney, said in April that the money raised by the website was put into a trust account that the attorney controls.

But in court documents, Corey said the money still belongs to the defendant.

The judge "relied on false representations and statements" by Zimmerman and his wife when the court set his bond at $150,000, Corey said. Zimmerman was required to post only 10% of that.

Corey argued that the court should revoke the bond or increase it.

Lester appeared angry that the court had not been told about the money.

"Does your client get to sit there like a potted palm and let you lead me down the primrose path?" he asked Zimmerman's lawyer. "That's the issue."

O'Mara said he had discussed the judge's decision with Zimmerman, who was not in court.

"He's frustrated because he now has to come out of hiding," O'Mara said in an interview with CNN.

"You need to realize we're still talking about a 28-year-old who's being charged with a crime he does not believe he committed, and his whole life has been turned upside down, so I think that it all needs to be kept in context."