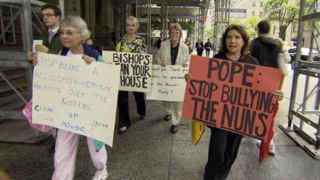 (CNN) -- The leadership representing most of America's nuns came out swinging Friday against the leaders of the Roman Catholic Church, in the face of charges from the Vatican that the nuns are espousing "radical feminism" and straying from church teaching.

The Vatican's criticism of the American nuns has "caused scandal and pain throughout the church community, and created greater polarization," the Leadership Conference of Women Religious -- which represents about 80% of American nuns -- said in a statement Friday.

The board of the group had convened in Washington this week for three days of special meetings, provoked by an April assessment from the Vatican that said America's nuns had largely gone rogue and warned that they could be a negative influence on the church internationally.

The Vatican report said that, at an annual gathering of the Leadership Conference of Women Religious, guest speakers who preached "radical feminism" went unchallenged. The report also said the nuns were too focused on social justice and not enough on opposing abortion, euthanasia and same-sex marriage.

The Leadership Conference of Women Religious said Friday that the Vatican's assessment "was based on unsubstantiated accusations and (was) the result of a flawed process that lacked transparency."

"Moreover, the sanctions imposed were disproportionate to the concerns raised and could compromise (the nuns') ability to fulfill their mission," the group continued in its statement.

The Leadership Conference's 22-member board said that its leaders would travel to Rome this month to meet with the head of the Vatican's Congregation of the Doctrine of the Faith, the office that launched an investigation of the American nuns several years ago.

Hours later, the U.S. Conference of Catholic Bishops issued a statement from Archbishop Peter Sartain in which he vowed there was a wholehearted commitment "to dealing with the important issues raised by (the Vatican's) doctrinal assessment and the LCWR board in an atmosphere of openness, honesty, integrity and fidelity."

"I look forward to our next meeting in Rome in June as we continue to collaborate in promoting the important work of the LCWR for consecrated life in the United States," said Sartain, who heads the Archdiocese of Seattle. "The Holy See and the Bishops of the United States are deeply proud of the historic and continuing contribution of women religious -- a pride that has been echoed by many in recent weeks."

Pope Benedict XVI, a theologian by training, was the head of the Congregation of the Doctrine of the Faith for decades before he was elevated to papacy. In interviews conducted while he held that earlier post, he spoke often about growing the church by pruning -- becoming smaller but more devout before expanding.

Church experts say that the nuns have a few options in responding to one of the most powerful offices in the church. They could accept the assessment, negotiate or resign en masse and form a new group outside the watchful eye of the Vatican.