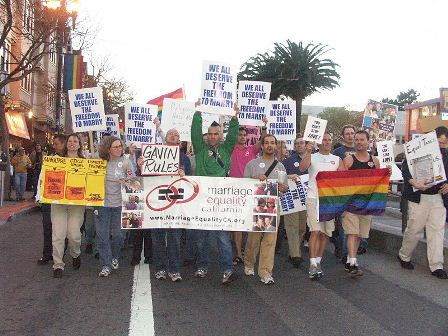 CHICAGO (AP) -- More than two dozen gay and lesbian couples filed lawsuits Wednesday arguing that it's unconstitutional for Illinois to deny them the right to marry, a move advocates hope will lead to legalized same-sex marriage in the state.

The two lawsuits - backed by the American Civil Liberties Union of Illinois and the New York-based gay advocacy group Lambda Legal - include couples from the Chicago area, Bloomington and Marion. Both challenge a state law that defines marriage as between a man and woman, arguing that the Illinois Constitution guarantees the right for same-sex couples to marry under due process and equality clauses.

Legislation to eliminate the law's language that prohibits gay marriage is pending, but a vote isn't expected before the legislative session is scheduled to end this week. And although Illinois enacted same-sex civil unions last year, couples in the lawsuits said the limited rights and protections make them feel like second-class citizens.

The lead plaintiffs in the ACLU lawsuit, which includes nine couples, are Chicago police detective Tanya Lazaro and systems analyst Elizabeth Matos. The women, who've been together 15 years and have two children, reject the notion of a civil union.

"It's not the same thing as a marriage. We want our relationship, our love and our commitment we've shown for 15 years to be recognized like everybody else's," Lazaro said. "When you're growing up, you don't dream of civil unions."

It's unclear how the state will handle the legal process with the case, but attorneys are ready to take the case to the state Supreme Court. The defendant named in the case is in favor of gay marriage as is Illinois Gov. Pat Quinn. A message left for Cook County State's Attorney Anita Alvarez was not immediately returned Wednesday.

The 25 couples in both lawsuits tried to apply for marriage licenses in Cook County, but were denied. The lawsuit names Cook County Clerk David Orr. A spokeswoman said Orr was out of the country and had not seen the lawsuit, but issued a statement on his behalf.

"The time is long past due for the State of Illinois to allow County Clerks to issue marriage licenses to couples who want to make that commitment," he said. "I hope this lawsuit clears the last hurdle to achieving equal marriage rights for all."

Currently, the District of Columbia and six states - Connecticut, Iowa, Massachusetts, New Hampshire, New York and Vermont - have legalized gay marriage, either because of legislation or the courts.

Courts decided for gay marriage in Massachusetts, Connecticut and Iowa. A lawsuit challenging an Iowa law barring gay marriage prompted the Iowa Supreme Court to legalize it in 2009. However, the three justices up for retention elections the next year were voted off the bench after being targeted by groups angered by the court's decision.

Lambda Legal filed the Iowa lawsuit in 2005, and advocates say the time for Illinois is now.

It's a year after same-sex civil unions were enacted, and recent polls show public support for same-sex marriage has steadily increased. President Barack Obama said earlier this month that he endorsed gay marriage, and Quinn stepped up his public support.

"We've waited long enough," said John Knight, director of the Lesbian, Gay, Bisexual, Transgender Project of the ACLU of Illinois. "It certainly helps that our president from the great state of Illinois has come forward and been a leader in recognizing freedom of same sex couples to marry."

Civil unions give same-sex couples some, but not all, of the same legal rights and protections as marriage in Illinois, such as the power to decide medical treatment for a partner and to inherit a partner's property. When that law was approved, however, opponents including some religious and conservative groups said it was an unwanted step toward gay marriage.

"The courts shouldn't mandate it. Nobody should mandate homosexual marriage," said Colleen Nolen, director of the conservative Concerned Women for America.

Lambda Legal, whose lawsuit has 16 couples, and the ACLU share the same goal to legalize gay marriage in Illinois but decided to pursue separate lawsuits because they have different historic missions. The lawsuits also slightly differ in legal reasoning.

Lambda Legal's lawsuit includes Janean Watkins and Lakeesha Harris, who were the first couple in line last year to get a civil union license from Cook County. They have been together for a dozen years and are raising six children, who are the reason Watkins wants to be married.

"We have the kids, it's important for them to see that the relationship we're in is validated by the state," she said.

Sophia Tareen can be reached at http://twitter.com/sophiatareen